The Old Grinder from the Hardware Store 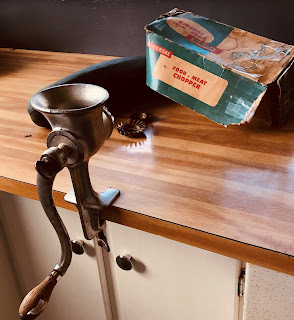 With zucchini so plentiful in the garden last week, my son Brian and I spent a few days making small loaves of zucchini bread. Some loaves will be for Christmas gifts and some will be for giving away—and some are for our own enjoyment.
The process began when I brought out my mother’s old Universal food grinder. The old grinder holds so many memories of preparing for so many Thanksgiving and Christmas dinners. I can still hear cranberries popping as they were squeezed through the grinder. Some never made it through. Instead they’d go flying through the air when the grinding speeded up and the juice from the cranberries fell into a yellow bowl sitting on the floor underneath the grinder. My mother once told me she bought the grinder at Barr’s Hardware located in a downtown of long ago.
The grinder is still as good as new. There are no buttons to push or speeds to select or cords to plug in. You just put the parts together and off you go. Brian did all the grinding of the zucchini. My mother would have loved how fast he had that grinder going.
Our first batches of zucchini bread were made from a basic zucchini bread recipe. But then we got a little creative by using my daughter Natalie’s recipe for "Double Chocolate Zucchini Bread." It was fun adding the baking cocoa and chocolate chips to the zucchini since zucchini is so bland. The result was a super moist, sweet but not overly sweet bread that I can tell you from trying a “few” slices, tastes as good as it looks. If you’d like to make some double chocolate zucchini bread, you can search for the recipe on my daughter’s website. www.parsleyandicing.com.
Enjoy and Happy Baking as September begins to unfold.
Posted by Barbara Briggs Ward at 7:59 AM