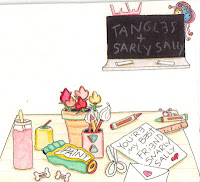 My love of chalkboards goes back to when I was growing up in the country and playing in the chicken coop clubhouse that had been gutted and filled with the remains of a one-room schoolhouse. This included the books, desks and one chalkboard. That's where the love affair began. It's where my cousin and I turned our imaginations up full speed and when we did it most always included using our chalkboard. That was especially true when playing school. Our pretend students would be called up one-by-one to fill in the answers to math problems or to draw shapes or to spell words or to connect a stick drawing to the matching word. If we were playing Cowboy, the chalkboard would tell tired passengers stopping at our pretend restaurant what the specials were for the day. It also gave the arrival and departure times of the pretend stagecoach. If we were teaching art the chalkboard, sitting on top of a small stool so we'd be able to reach it, was on overload. Intrigue of chalkboards followed me into middle school. I remember being chosen to write the words of the week every Monday morning for a month on the chalkboard. I had so much fun. It made Mondays bearable. It also made my teacher tell me to hurry up. I'd spent enough time at the chalkboard. Chalkboards are no longer used in schools for health reasons. While I understand I remain thankful that when I went to school I was able to draw or write or doodle on a chalkboard. Chalkboards were just part of the routine and had always been part of my growing up out in the country.
Posted by Barbara Briggs Ward at 9:59 PM 2 comments: 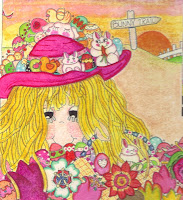 Growing up in the country, Easter meant one thing-amazing treasure hunts plotted and executed by an uncle who was just a kid at heart. Early Easter morning that uncle would go on his mission of hiding small clues written on strips of white paper absolutely anywhere he pleased including the fields and creek and old barns and granary and pumphouse and garages and cars and sidewalks and trees and woodshed and that chicken coop turned into our clubhouse. He'd have them hidden before we got up!

Rain or snow we'd be outside most of the day searching, running, peering, wondering, figuring-scratching our heads-one minute in deep despair unable to find the next clue while maybe seconds later jumping for sheer joy with that clue in hand, ready to figure out where the next clue might be. You must understand the clues were not hidden haphazardly or were they obvious. And each clue was cleverly written by clever wording. The entire hunt was thought out, mapped out and staked out with every little detail considered for remember, that kid at heart was behind it all.

There were proably about 20 clues. The older kids would haul along the younger ones who'd get tired but the thought of a brown grocery bag with their name on one loaded with candy kept them in the race. For the older kids it truly wasn't the candy. It was that mastermind watching from his glassed-in side porch getting as much enjoymnet watching as he had creating the Easter maze. It never failed that a few times during the hunt one of us would run to ask him for an extra clue if we were stumped but he never obliged. Looking back, I'm glad he didn't. Not once was the treasure not found. We did it all on our own. Although there was one particular time when we almost quit. That was the year our uncle hid the brown bags way underneath the creek grass. We'd figured the clue out but there was so much creek grass! We scoured the bank of that old creek over and over again and again. We'd stomp our feet, move aside the course grass. When the bags were found, we cheered all the way back home.

When you think about it those treasure hunts were ingenious ploys to keep us outside all day until dinner. We were out from under foot and the older kids were babysitting the younger ones while the adults gathered peacefully inside. That uncle was more of a mastermind than I ever realized back then-out in the country, searching for brown grocery bags full of candy hidden by a man with the heart of a child.
Posted by Barbara Briggs Ward at 8:19 AM No comments:

I've never know a child who doesn't like blowing bubbles or chasing bubbles or watching bubbles drift away. With all the super-duper, high-powered bubble-producing toys now on the market with huge containers of all sorts of bubble solutions, it's easy to blow multi-layered bubbles that amaze even adults. Suddenly the adult is a little kid again-fascinated with all the bubbles swirling and twirling and disappearing in mid-air. They have as much fun as the children around them following those huge, moving masses of bubbles to see how far the wind will take them.

I remember watching bubbles float through the air when playing outside in the country and we didn't have all those fancy plastic contraptions-just little plastic bottles full of sticky bubble solution with small plastic wands inside. We'd cheer the bubbles on as they some how missed hitting bushes and fences; catching little whirlwinds, they'd forge on against the odds. We'd be amazed by their journey no matter how short lived it may have been although it never seemed short lived to us. When inevitably a bubble popped by hitting a tree branch or blade of grass or simply popping into extinction in the open sky out of sheer exhaustion probably-it had to be, we'd feel as if we'd lost a good friend-until another one came floating our way.

If and when we ran out of the guck we'd hurry back inside, fill our containers with dish detergent and water, shake them up, and run back outside to blow more bubbles.

Blowing bubbles is sheer, innocent fun. One size fits all. No batteries required. No confusing directions to follow. Blowing bubbles makes you laugh and run and imagine-all good things for kids of all ages!
Posted by Barbara Briggs Ward at 9:57 PM No comments:

Waiting for the Easter Bunny!

I venture to say Easter took more preparation time than I realized when I was a kid oblivious to all the behind-the-scenes-goings-on out in the country. I'm sure the week before there were phone calls between those four houses in a row concerning recipes and who-was-to-do-what and jelly bean and chocolate bunny buying and shopping for new shoes that went clickety-click on sidewalks. But when your focus is on that Bunny and what he will be leaving in the biggest basket you could hope for, you really don't care who's cooking what or what time the family gathering will take place. The day always turned out perfectly which only strengthened my remaining in a state of oblivion.

Every year the Easter Bunny snuck into our house without me hearing him. My older brother would tell me he saw him but I knew he was fibbing. It didn't matter! I had other things going on like an Easter basket overflowing with bunnies and chicks; jelly beans and eggs; a few bubble gum cigars and a box of Lucky Srike or Pall Mall candy cigarettes-always a big hit! There'd be candy dandies which stuck to my teeth like glue and rolls of candy wafers which I'd trade certain colors for ones preferred. I loved the chocolate ones. So did my brother! Most every year we'd find plastic chickens in our baskets. When you pushed them down they'd lay small plastic eggs! The Easter Bunny always took time to hide jelly beans and chocloate eggs around the house. He even made a jelly bean trail that we'd have to follow to find those baskets. What a great Bunny he was! He knew how to turn every Easter into a fabulous memory.

Breakfast was all the traditional favorites including hot-cross buns with homemade icing served warm with eggs, pancakes and french toast covered with real maple syrup, and bacon plus freshly-squeezed orange juice. A few hours later we were back for a ham dinner with all the trimmings and a few hours after that feast we'd gather to nibble!

I never did catch that Bunny filling my basket. But a few times I caught my father sneaking a chocolate egg from a bag hidden in one of my mother's serving bowls in a kitchen cupboard. I wonder if the Bunny knew he left them behind! Maybe he knew my father had a very sweet tooth!
Posted by Barbara Briggs Ward at 11:32 PM 2 comments: