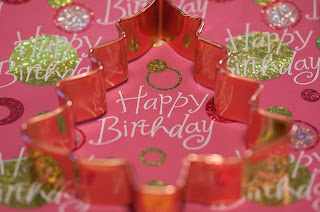 Our family celebrates many December birthdays-some at the beginning of the month and two the day after Christmas. Over the years I've found having a child with a December 26th birthday to be a real challenge. Just to separate the two events is near impossible since the house is a mass of opened gifts-some still in boxes under the tree and some still looking for a place to be put and Santas and reindeer and twinkling lights and ornaments all over the place. Everyone is exhausted from the day before and the thought of having to go to a store for something forgotten for the birthday celebration is met with hesitation or that something is substituted with something left over from Christmas. There were years when birthday gifts were wrapped in Santa paper; times when a few birthday gifts were meant to be given for Christmas. And more often than not, whatever we did it always seemed the two holidays meshed into a two-day event of Christmas trees and snowmen with balloons and blowing out candles and everyone talking about the day before while singing Happy Birthday.

But I've come to realize-after years of celebrating Merry Happy Christmas Birthdays-those birthdays are very special despite the meshing with Santa and reindeer and twinkling lights and ornaments. They come at the most joyous time of the year. They fall in the month of celebrating-so blow out the candles and enjoy the cake-no matter the shape!

Posted by Barbara Briggs Ward at 9:26 AM 2 comments: 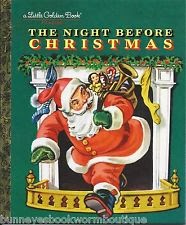 When I was young I had a cousin who lived about 45 minutes away. It was fun to go for sleepovers. Part of that was because she had an amazing number of Little Golden Books-all lined up at the front of her bed-inside a bookcase-type headboard. Those books were perfectly sized for little hands when lying in bed pretending to read.

Before computers, illustrating anything relied solely on the original artwork. There was nothing called photo shop. Nothing was digitally adjusted because digital did not exist. In my opinion, this resulted in softer-more enticing artwork. They each had their own feel. They ignited imaginations. At least they did mine! I loved that Roly Poly Puppy trying to get under the fence and Nurse Nancy who loved playing nurse. I wanted all the little animals in Baby Farm Animals. Tootle-the little engine who went to school to learn how to be an engine-was a favorite. I feared that wolf in The Three Little Pigs, worried about Hansel and Gretel, Little Red Riding Hood and Goldilocks. Nothing teaches a lesson of self-worth more than Scuffy the Tugboat but as a kid, I didn't realize that and The Fire Engine Book made me feel like I was riding along with those adorable firemen and their Dalmatian. To me, the most amazing Little Golden Books remain the Christmas stories written by now famous writers of now heartwarming Christmas classics. Clement C. Moore's "The Night Before Christmas" and Robert May's, "Rudolph the Red-Nosed Reindeer" have withstood the test of time and computers-as has Frosty the Snowman.

Actually all those Little Golden Books have withstood the test of time. Many remain on my bookshelf where both my children enjoyed 'reading' them or having them read to them. Now it's the next generation-sitting in front of all those books lined up on shelves and pulling them out until they surround her-and then searching through the little pages and discovering a roly poly puppy-a little nurse named Nancy-those  little pigs or those fuzzy, cuddly baby farm animals or two little kids following a bread trail trying to get back home-and those Christmas Classics. So while they may be little-Golden Books have made a huge impact on generations, and that in itself is no small task!
Posted by Barbara Briggs Ward at 10:15 AM 2 comments: 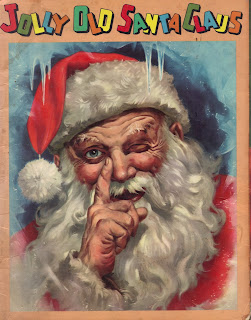 In my bookcase there sits a worn and tattered copy of this 1957 Ideals Publishing Company's Christmas story, "Jolly Old Santa Claus." Some of the pages are ripped; some held together by tape; some have crayon scribbles on them. My children loved this book when they were growing up. It wasn't because of the story. I can't remember us reading the story. It was the amazing illustrations by George Hinke that kept us going from page to page-night after night before Santa came to fill stockings, eat cookies and drink a glass of milk, pick up penciled letters filled with Christmas wishes, and leave a few special gifts under the tree.

Sitting on the sofa in their pajamas as snow fell and popcorn popped, each page turned became a journey into that Wonder called Believing. Details were executed magnificently-with Mrs. Claus patting the dough before rolling it out on the old wooden table-and elves carrying trays of cookies to and from the small, brick ovens. Santa's workshop drew them in to the hustle and bustle of last minute preparations-from painting to nailing to packing a certain oversized sack for a long night's journey. They were in awe of elves blowing glass ornaments and firing them in the ovens. They took note of Santa sitting back in his chair reading letters as elves brought in more and more sacs overflowing with even more letters. "Does Santa read them all?" they'd ask.

They could almost feel the cold when Santa and his elves were in the woods after Christmas trees. They'd really get excited when Santa was preparing to climb aboard that amazing sleigh as reindeer were being hitched and the sleigh loaded down with gifts-so many gifts and so many elves helping. Of course what made those pages magical were the little hands turning them and little voices asking questions and their laughing with eyes full of Christmas magic. (That's the sort of Magic a parent notices.)

Now as I look at Mr. Hinke's illustrations I am struck by the fact that none were computer generated. Obviously there were no computers back then and that's what makes them so very Wondrous-perfect for little imaginations to curl up on the sofa with-in their pajamas-and a bowl of popcorn as Christmas nears and pages are turned. 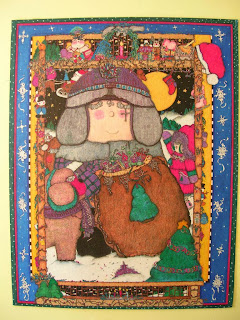 The floors in that small auditorium were always shiny. I now realize that meant they were polished but I was quite young that particular Christmas when sitting in the grade-school auditorium with a stage at one end and high windows at the other. All I knew was the floors were shiny. They squeaked when you walked on them. I'm not sure but I think I was in kindergarten. I remember sitting in a chair surrounded by other kids in chairs squirming and looking around for family members just like I was doing. The chairs were the heavy fold-up type. They were cold to sit on. They didn't budge because each leg had a rubber-stop thing on the end of it.

The place was jam packed. An overflow of parents and grandparents were standing in the back and as the curtain rose the Christmas program in that little school was underway to cheers from tired children and tired adults as well. After all, Christmas was near. Class parties had been held. Gifts exchanged. The program was the last event before school recessed for the Holidays. I couldn't tell you a single thing about that particular program except for the last few minutes. That's the part I'd been anticipating. That's when my older brother stood up in the audience and sang-all by himself. He had a solo part-singing a verse of We Three Kings. I was so excited! I didn't understand a thing he sang-'myrrh is mine: it's bitter perfume' made no sense to me but it didn't matter. That was my older brother standing with everyone looking at him. And when he sat down, everyone clapped and cheered just like me. As life would have it-years later I was back there as a parent and each time I attended a Christmas program I thought of when my brother sang that Christmas verse in that little neighborhood school.

Sadly, this year will be the first year there will be no Christmas program in that auditorium. There will be no tired students and tired adults gathered to celebrate the Season. There will be no yawning Santas or crying elves or little girls dressed up in pretty dresses or little boys with white shirts and dark pants or grandmothers grinning or parents snapping photos because the school is closed. It's for sale. The auditorium is quiet-empty. But if I try, I can still hear my brother sing that strange stanza-still see my daughter dressed as Mrs. Santa Claus-still see my other daughter in a pretty dress. Over the years that auditorium presented Christmas magic to so many families-including a little girl listening to her older brother sing.
Posted by Barbara Briggs Ward at 10:50 PM 5 comments: