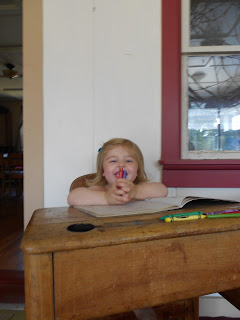 Recently when going through files of pictures, I found myself looking at this particular photo differently than when I took it awhile back. Of course seeing my granddaughter smiling, holding her crayons still makes me as happy as it did that Sunday afternoon. But this time it had a deeper meaning. Maybe it's because she's growing up. Maybe it's because she is talking a mile a minute and asking questions and sings and dances and loves butterflies and jewelry and dinosaurs and books and knows her colors and can count and remembers where she left everything when visiting the last time. Or maybe it's because I still remember her father sitting at that desk-coloring, playing with his G.I. Joes and Matchbox cars. She looks just like him. It's the eyes.

When curiosity got the best of her that day, I helped her open the top of the desk. We found a few G.I. Joes-a few scribbles her father had done and a few papers from when he was in elementary school. They had gold stars on them. She loved the purple stars Santa left all over her presents last Christmas-loves the moon-loves going up and down the stairs and taking bubble baths and sticking stickers and playing hide 'n seek. She looks for the two pound puppies I keep on the back of the sofa for when she visits. One belonged to her father. She loves playing with the mother whales and their babies. She puts them in the tub with her. They were her father's too.

That desk has even more of a history. It was in the old chicken coop converted to a clubhouse when I was growing up out in the country. I bet I sat at that desk when playing with cousins. I probably colored and had fun dropping things down the inkwell into the desk-just like my granddaughter did-just like her father did. Some of the marks on the top of the desk might have come from me-or her father-or maybe there are new ones from this little blessing herself. Funny how things become heirlooms without our noticing. But then who notices time passing day by day. We're busy-until something like an old desk with an inkwell and a top that's fun to open and close over and over again-or mommy whales kept in a worn, cardboard box with their babies-or even pound puppies worn by hugs-stops us in our tracks and makes us take note of time whizzing by and babies growing.
Posted by Barbara Briggs Ward at 11:13 PM 3 comments:

The Creativeness of Hands 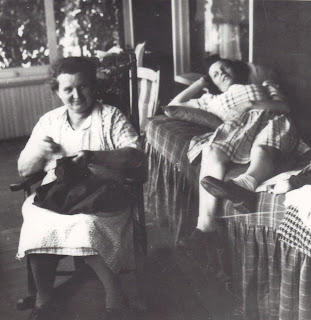 I've noticed in many of the old photos I've seen of my grandparents-so many show them using their hands to create something. While they obviously used their hands to do the necessary-cook, garden, tend to crops and barn duties, clean, do the wash, care for children, etc., whenever there was an opportunity, their hands got busy in a different way-a way of relaxing and making things; stimulating their soul after a hard day's work or after completing one task before getting on to the next. Maybe that's why my aunts, mother, and grandmother got together once a week for what they called their 'Busy Fingers' Group. They'd take turns hosting the group. I remember times when it was at our house. They were always laughing and talking!

Of course back in my grandparent's day television was a non-factor. There were no zillion channels with still nothing to watch. Texting wasn't a word. Communicating was face-to-face. And when that moment came-that break in the day-when there was time for one's self-out came the knitting needles or crocheting needle or the sewing machine was humming or rags were being ripped into strips for braided rugs or a saw was cutting wood into pieces and shellac was painted over boards turned into bookcases and desks-or hands were holding magazines like The Saturday Evening Post or books were being read in a chair in the front parlor.

It's not that creating has stopped-not at all. There are amazing artisans doing amazing work-painting, sculpting, sewing, knitting and so on. I think the difference is that back then-after putting in very hard days of never-ending chores-they had to, at the end of the day or whenever they could, muster the energy to create-and they did. And they did it masterfully!

Posted by Barbara Briggs Ward at 10:35 AM No comments: