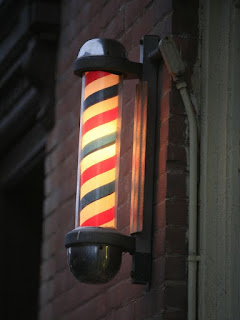 When I was a little girl my mother would take me to a barber shop to get my hair cut. It was situated in the heart of the downtown in my hometown. It was a perfect location; right where the two main streets crossed and in wait of Christmas, a plastic Santa in his sleigh with his reindeer were strung over top those streets. It was a huge draw to the downtown. When the wind blew I was convinced those reindeer were flying.

To me that barber shop was as good or better than any beauty parlor around. But then, I'd never been in any of those fancier places where women and girls went for styles and perms with lots of hair spray and hair curlers and hair teasing and big awkward hair dryers; maybe even some Dippity Do. It wasn't time for me to move on to a beauty parlor.

I loved going to the barber shop. Following my mother up what might have been winding cement steps, we'd go through the door leading to a very large area. That was the barber shop. I think there were four barbers. Each was dressed in a clean, white, crisp buttoned-up the front professional barber shirt. Whoever ironed those shirts was a master. Each shirt had a pocket on the upper left side. Those pockets held black combs. The barbers were rather dapper looking; as if cast in a gangster movie out of the '30s & 40s. All four were friendly. All remembered my name and my brother's name and where my father and mother worked and where we lived. That familiarity is what you get when rooted in a small town.

It never mattered to me which barber cut my hair. I wore a Buster Brown hairstyle for years back then and each one of them was capable of cutting my hair in that popular style. It was fun sitting in a barber's chair with its leather seat. The barber would push down on a foot peddle that brought that seat higher which meant I was closer to him so he'd be able to reach me.

The barbers stood in a row behind their chairs. In front of them was a wall of mirrors and a countertop holding containers of more combs with scissors sitting in place and powders in a row along with a phone and drawers below holding towels and coverings for customers. On the side of their chairs hung a leather strap used for sharpening their razors before shaving a customer with what looked like whip cream. They put that stuff on using brushes. I liked watching them. I don't think I realized how sharp those razors were or how skilled a barber had to be in using one. The way they moved those razors was as if they were conducting an orchestra. It was magic.

I can't remember when I stopped going to that barber shop. Probably when I realized no other girls my age went to a barber for what was considered a real hairstyle. But whenever it was that I moved on to a beauty parlor-not a one that I've frequented could ever measure up to that barber shop in a downtown of long ago. It had character with characters. The smell of lather along with newsprint from newspapers set out for customers to read along with powders and hints of cigars from a nearby cigar store all mingled together and remain forever in my heart. There were no fancy services offered. No fancy décor except for the red and white barber pole outside and the smiles of welcome on the faces of four happy and talented barbers.
Posted by Barbara Briggs Ward at 10:52 AM No comments: