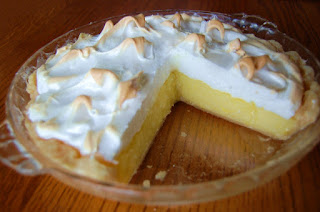 I've written before about my grandmother's skills when baking pies. Her recipes featured measurements such as a pinch-a dash-and a sprinkle. This time of year she'd be on overload making her pies. Many would be berry pies because of the abundance of wild berries in the fields surrounding the farm. From raspberries to blackberries and strawberries, berry pies were created and enjoyed one right after another. But one pie didn't contain any berries; no apples or pumpkins. The main ingredient in that pie was lemons. And on the days when she made her mouthwatering lemon meringue pies, my grandmother's  kitchen was bustling.

The process began with her creating the most flaky pie crust I've ever tasted. Her pie crusts were perfect every time she made them. Every pie crust offered the same consistency, the same flavor, look and smell as previous pie crusts. She'd measure the flour, salt, water and lard together. Then divide the dough into two balls if it was a two-crust pie and start rolling out the crust. Of course her lemon meringue pie was a one-crust pie. That sweet meringue was the topping.

My grandmother used lemon juice when making her lemon meringue pies. She'd gather the sugar, salt, flour and cornstarch in a saucepan .Adding water a little at a time, she'd cook the mixture in a double boiler, stirring until it thickened. Then egg yolks were stirred. Butter and lemon juice were added and then poured into a baked pie crust and cooled completely. While that was cooling, my grandmother would create her delectable meringue; beating the egg whites until they held a soft shape; then adding the sugar until the meringue was stiff enough to stand in peaks. Spreading the meringue on top of the cooled pie, it was placed in the hot oven until the meringue was lightly browned.

To taste my grandmother's lemon meringue pie was like tasting a little bit of heaven. The combination of the lemon and the fluffy, sweet meringue was proof that opposites attract. Those lemon meringue pies made with love in my grandmother's farmhouse kitchen never lasted very long. That's because those pies were favorites; enjoyed by young and old alike.
Posted by Barbara Briggs Ward at 7:55 AM No comments:

When my grandparents lived in their farmhouse, many times during the winter my grandfather worked on projects in the kitchen. In the evening he’d shut the door leading to the dining room and get busy. He’d do it all in that kitchen-from sawing to nailing to finishing. The end results became keepsakes to those lucky enough to be given one.


I’ve written before about the pine desk my grandfather made me. I fell in love with it the first time I saw it on Christmas morning when I was 8 years old. Smelling of shellac, it came with a stool and a single drawer. Inside that drawer was a pad of paper with a sharpened #2 pencil.


My mother was another recipient of one of my grandfather’s wooden heirlooms. Hers was a bookcase made of pine with three shelves. The bookcase was the perfect gift for my mother as she was an avid reader. Her favorite books were mostly novels set in the South during the Civil War; the era of Rhett and Scarlett and big hoop dresses and sprawling plantations. I remember the times she would take me with her to a small bookstore located inside a department store in our downtown. I loved going with her. Even though I couldn’t read I pretended I was reading. There was something intriguing about all those books on display in that space. It might have been the smell of all those pages with all that ink printed on paper. It might have been the window displays or watching my mother making her selections with such care. Because my mother was an RN, eventually working the night shift as Charge Nurse in the ER, she always took a book with her to the hospital. If she had time she’d spend that time reading. Thinking about it now, reading was probably a way for her to relax if given the chance while on duty.


When my mother passed away I was lucky enough to have been given most of her books. Some of those books have her signature inside. But the bookcase eventually went away on a long journey until a few weeks ago. That’s when that bookcase with three shelves came back home to me via one big truck where it looked funny all packaged up and sitting by itself. That bookcase is now in my living room where it will be holding some of those Rhett and Scarlett type novels. It looks the same as it did when it was in our home out in the country; sitting in the living room with the only phone in the house sitting on the top shelf. Those were the days of telephone operators. Our number was 2094. It’s funny how you remember such a thing.


My mother kept the phone sitting on a pillow so in case it rang during the night it wouldn’t wake her up. I never could figure that out because back then my father would often receive calls during the night. Those were the days of no rescue squads. Funeral Directors did that job so my father, being a funeral director, would get some of those calls. He always heard the phone. He never missed a call. I equate that to being a mother. You sleep with one ear on alert.


Now looking at the bookcase I can still outlines of books that sat on those shelves so many years ago as well as burn marks on the top of it. In a hurry while smoking a Camel cigarette, my mother would sometimes put her cigarette down on the top edge of the bookcase while she did a chore or changed her 33LP record in the stereo console. Oh she did have ashtrays but they were in the kitchen and if she was in a rush and smoking a cigarette, down it would go on that bookcase while she tended to whatever it was needing her attention and that included her children. I know it probably sounds horrifying to some to think my mother would be going around the house smoking her cigarettes but that was a different era; an era of the Marlboro man and a ‘Winston tasting good like a cigarette should’ and operators saying “number please” with one phone per home.


Funny how a simple pine bookcase could go on a journey and end up back where it began years later in one piece with no nicks except for those burn marks made by its original owner. The bookcase with its pine boards still smelling of shellac is a reminder of that farmer working into the night in his farmhouse kitchen creating heirlooms; each telling a story for anyone who’d listen from one generation to the next .
**!st Photo: I am 9 years old on a Christmas morning when we lived in a house on a lane before moving to the country. My grandmother is watching me and the bookcase is behind me.
**2nd Photo: So many years later the bookcase arrives back home to me. 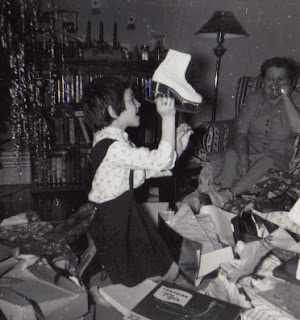 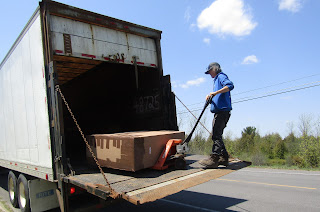 Posted by Barbara Briggs Ward at 12:00 PM No comments: