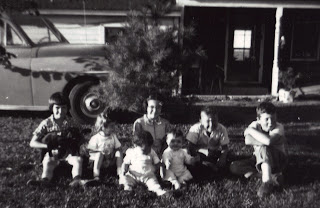 I've written so much about growing up in the country surrounded by grandparents, aunts, uncles, and cousins. I've gone on about playing in the barn and down at the creek and in the pine grove and especially the hours my cousins and I spent in our chicken coop clubhouse. More often than not we older ones took care of the younger ones and we never knew it. We were all just playing.

Oddly enough I hardly ever write about cousins on the other side of the family. That's because I hardly knew them. That was my father's side of the family. I have no clue why we didn't get together that often. It's not that they lived far away. They were close by-down another country road. Maybe it was because that side was all brothers and my mother's side was all sisters. Maybe it was because we were always involved with my mother's side since they were our neighbors. In the summers we shared our dinners under my aunt's pine trees. It was a given that every holiday we would be together. On Sunday nights we took turns having supper at each other's home. My aunts and mother and grandmother and some of us older ones met for coffee in one another's home all the time. On many summer evenings the adults would gather outside around a fire in a cinderblock fireplace. They called it 'the range.' They'd stay out there-talking and laughing-for the longest time.

Any recollections of my father's side is like a quick flash in my mind. What I can recall, the feeling I get has always been I wish there was more stashed away in my head somewhere that I could tap into and remember and mull over and keep near. I only have one brief memory of my father's mother and that is not of her face. Rather, it is someone-and I've always assumed it would have been her-in an apron-the kind of apron that you put over your head and tie in the back. I was really young-coming through a doorway into a dining room-near a table with a lace tablecloth and a teapot sitting in the middle-that's when that someone picked me up and hugged me. I've told myself that was my grandmother. I've always hoped that was my grandmother. I recall my father's dad a little more than his mother-mostly sitting in a chair in a front room of one of my father's brother's home. We did visit that place-just not often. I remember the winding staircase and having pillow fights and a big kitchen with lots of cupboards. I always had fun with two cousins who lived there. Their parents were always fun too.  Farther up the road there were four more cousins-two boys and two girls just like my family-and a very nice aunt who was a really good cook and an uncle just as nice and for some reason I remember him always smiling. Just down from them was the family homestead-the home of that lace tablecloth and that grandmother who hugged me.

One day not too long ago a gentleman stopped to see me. He lives not far from my relatives who lived in the house with the winding staircase. He asked if I had a minute. Then he began by telling me that right across the road from his home there is an old monument-a burial plot-dedicated to my father's side of the family which I never knew existed-which I rode by countless times. He explained that a year or so earlier he'd seen some women walking around that plot so he went over to see if he could help them. It turned out they were long, lost relatives on my father's side looking for any long lost relatives who might be living in the area. He took their information. Told them he knew me and he would get in touch with me. When he told me all of this I gave him my contact information. Not too long after that my cell phone rang early one morning. It was one of those women who'd been searching for answers at that burial site.

What a feeling that was-to talk to a stranger who, it turned out, was a cousin of mine. Long story short, that cousin and her mom recently came to my home for supper. Two of my three siblings and a sister-in-law joined us as did another cousin whose mom was that very good cook. Sitting around a pot of goulash we talked and shared stories of what we could remember. That new cousin's father had put countless hours into the genealogy of that side of our family before he passed away. That cousin has continued where her father left off. She came with books and documents and copies of letters and newspaper clippings. She showed us how we are all connected. She literally mapped us out all the way back to England; told us our first relative landed in Boston in the 1600's; told us a relative was one of the founders of Portsmouth, R.I; told us one of our relatives was the first white baby born in the county where I live. Before that it'd been all Indian babies. She told us so much that evening. She left me some books to read more about some who came before us.

But she left me with more than that. She left me with a warm place in my heart for all those people I never knew whose names I had just been told along with snippets of their lives and where they lived and if they had children and what they might have done. Their lives are part of me. What they did are part of me. We are all like puzzles and if we are lucky enough, we find most of the pieces of our lives-who shaped us into who we are-before it is our turn to leave a legacy for those who will follow. I have been blessed by being connected to a side of my family I hardly knew. But that is changing. The blank pages of our story are being filled in. Now it is up to those of us who sat around a pot of goulash to keep in touch. Something tells me this is just the beginning!
Posted by Barbara Briggs Ward at 8:15 AM No comments: 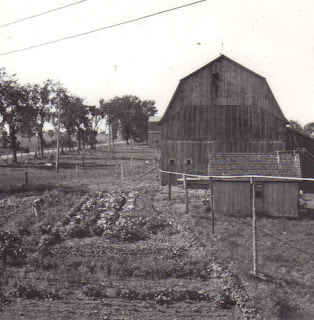 With gardens now in overload-plants spreading their vines beyond the edges like spider webs, covering everything in their path; their leaves and bounty selfishly and boldly declaring they rule the back yard or back field or wherever a garden may be, I hear people saying they don't have time to weed or water or even pick and cook and can or freeze or giveaway the beans, peas, squash, zucchini (oh how those zucchini plants produce), tomatoes, corn, beets, carrots, potatoes, peppers, onions hanging from plants or clinging to vines or underground waiting to be discovered.

When I hear this-and I say that too-I think back to the gardens on my grandparent's farm.I remember one along the side of their farmhouse. My cousin and I would help weed it. Even better, we'd sit and eat the carrots. But I don't remember the one in the photo above which shows my grandmother at a very young age working it. Besides seeing her so young, what struck me was the enormity of that garden. I still can't figure out how she had the time to take care of it; how she did everything that a garden demands besides all the other demands on her-children, cooking, baking, washing, sewing, the farm and husband. I'm sure her children helped when old enough but still. Back then there were no weed eaters or hoses or chemicals to spray on or shake on or plastic to cover or line the rows. The only 'miracle grow' was a combination of the sun and rain-and you had no control over either. There were no fancy hoes or spades or apparatus to kneel on or sit on or fancy garden wear to protect you from thorns or nature. You simply went out and worked the garden. You had no choice.

We are all connected by technology. Anything we want to know about gardens and any other subject or fact or person is a click away. That generation was connected to the earth and soil. They were at the mercy of Mother Nature. I guess everything hasn't changed for despite our instant connections and technology and fancy products we are at the mercy of Mother Nature too. Kind of nice you know. There are some things that should be left alone-and Mother Nature is one of them-even though she seems a bit out of whack these days.

Posted by Barbara Briggs Ward at 10:57 AM No comments: