I Think I Found Christmas 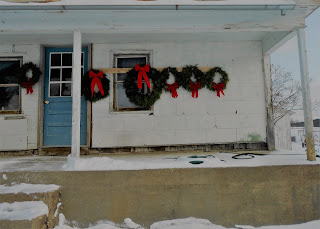 I’d ridden by the Amish farmhouse with Christmas wreaths displayed on the front porch a few days earlier. The contrast of red bows against off-white clapboards caught my eye. I didn’t have time to stop but I knew I’d get back there. And I did earlier this morning despite the zero-degree temperature and a light snow making the less travelled, winding road a little slippery. But that didn’t stop me. There was something about that simple house with corn shocks gathered in a nearby field and those wreaths on display in the cold that made me feel like Santa lived there.


I noted tracks leading from the barn to the road. They were from the wheels of a buggy and a horse pulling it. I noted footsteps in the snow. Someone was off somewhere early. Maybe the North Pole?  Thoughts of that someone out in the freezing cold made me hurry along a shoveled path leading to the front porch where the wreaths were hanging from nails. Aromas of cedar and pine and something baking inside brought me back to the times when I was a little girl visiting my grandparents at their farmhouse; especially this time of the year; the time of cinnamon and nutmeg; wreaths being made in the kitchen; an old Singer sewing machine humming and my grandfather’s saw creating surprises like a pine desk complete with a stool-my most favorite Christmas gift ever.


Swirls of snow dancing over drifts took my breath away as I knocked on the door. I could hear a baby crying. I could hear a little one running around. When the door opened I was greeted by a young Amish woman holding the baby. She didn’t invite me in. We stood there looking at each other until I asked about the wreaths. I was told they weren’t for sale. They were a special order. That’s when the baby really started crying. It was just too cold. The mother asked me in while she tended to her little one. The minute I stepped inside I felt as if I was back at the farmhouse where I spent endless hours as a child.  I felt as if my grandparents were there. In a way, they were as the floor creaked and the wind edged its way in between cracks and aromas of yeast and currants and kneaded dough and spices swirling from an oven brought to mind my Grandmother’s Christmas bread. Could it be that’s what was in the oven? Anything was possible. Christmas was coming.


A few minutes later I was asked to sit down at the table. The baby was sleeping. The toddler was peeking at me. We exchanged names. We talked. I learned the other children were at school. Watching her finagle her many duties brought me back to when my children were young. It seemed like yesterday. And yet, it seemed like an eternity. She disappeared for a minute only to return with her arms loaded down with boughs of cedar and pine. She explained she had to finish that special order. Watching her gather her materials reminded me of the times I’d do the same when I had a minute, only I’d be gathering pads of paper with scribbles I hoped to turn into a story if I had the time.


I decided I’d stayed long enough. This mother was trying to create with duties all around her. I stood, telling her I had to get back home.


“I would like you to take a wreath. Pick anyone you’d like, except for the large one, off the porch.”


I told her I wouldn’t take one if she didn’t accept money for it. We made a deal and minutes later I was walking along that shoveled path holding on to a precious wreath of pine and cedar with a red bow and pine cones made by what could have been an elf in disguise if you took in account her spirit of giving.


Driving down that narrow, slippery road I noticed a buggy being pulled by two horses coming towards me. As we were about to pass I felt chills going down my spine. If I didn’t know better the older gentleman in that buggy could have been Santa Claus. I mean he really looked like Santa Claus with wire-rimmed glasses and a beard as white as snow flying in the breeze and a twinkle in his eyes and a smile that made me feel like it was Christmas morning. I saw deer running in the woods. I bet they were on their way to the North Pole. I mean, it’s Christmas.
Posted by Barbara Briggs Ward at 9:57 PM 3 comments: 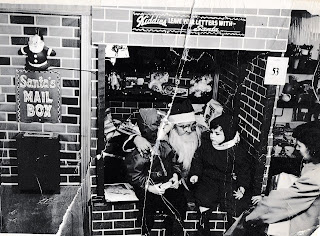 Despite the rip right through my older brother's face, this photo is in pretty good shape considering its age. I am so thankful I found it in a box of old photos meant some day to be a part of a family album. Of course back when it was taken there wasn't the technology as there is today so if photos weren't put into albums immediately, they were added to a collection of photos stored away in a drawer or a box once they were developed. I'm figuring a store employee took this photo. I think that #53 is a reference number for the photo. It doesn't matter. What matters are the memories, despite the fact I have no recollection of that day-still dressed in my snowsuit in the basement of a J. J. Newberry's in the heart of the downtown in my hometown.

I remember hearing stories of going there to see Santa Claus when we were little. I remember walking down the stairs and turning right but that's it. Maybe I can't remember because I would get so very excited when seeing Santa Claus despite my not even acknowledging him in the photo. My mother would tell me stories of the Christmas mornings when I'd be so over-the-moon excited that I actually made myself so sick that she had to bundle me up on the sofa while she and my father and older brother opened their presents.

From what I can recall hearing, Santa's booth was not far from the stairs. It was against a wall. It was busy every day leading to Christmas. My mother helped my brother and I write our "Letters to Santa Claus." We'd bring them with us to Newberry's to drop in that box in the photo. I remember a main item on my list for a few years was a Bonnie Braids doll. When I finally found her under the tree wrapped in Santa paper it was like finding a pot of gold-even better.

Usually it was my mother who took us to Newberry's but it is an aunt in the photo waiting while Santa talks to us. That aunt was like a mother to us. She never married so her nieces and nephews were special to her. We loved talking Christmas with her. We loved how she wrapped the presents she bought for us.

It wasn't until years later that my mother told me the Newberry's Santa Claus was a woman. She worked with my mother as a nurse and loved playing Santa Claus. I decided that's what matters. She loved igniting that wonder and belief in the children who came to see her in that store basement. That to me is what Santa Claus is all about.

Posted by Barbara Briggs Ward at 9:56 AM No comments: