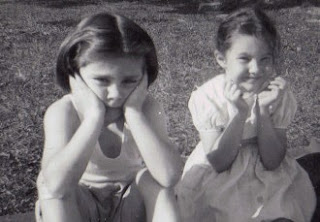 If I had to guess we might have been taking a break from playing although I don't look very happy. I was probably bored just sitting there. Maybe I wanted to get back to playing in our clubhouse. Looking at the picture I can imagine my mother saying one of her most often used phrases, "quit your lollygagging!" She'd say that all the time when, in her eyes, someone was going too slow or wasting time or spinning their wheels in indecision.It took me a few years to figure out what she meant. When I understood, her words made sense.

The earliest recollection I have of her speaking those words to me was when we lived in the house by the lane. That was the first place I called home. I was sitting on the sunporch playing Old Maid with my two best friends, Chunnie and Winnie. They were my imaginary friends. That's the reason why I won every single card game. But this particular day my mother suggested maybe I lose a game; telling me no one ever wins every game of whatever they are playing. I took her advice. But as I dealt the cards out I felt a nervousness in the pit of my stomach. As the game progressed, that nervousness continued. The closer it got to the end, the longer I took in ending it. I couldn't decide which friend would be the winner. I guess I took too long. My mother came walking onto the sunporch and told me in a stern voice to "quit your lollygagging" and claim the old maid in my hand of cards. Well I soon ended the game. But I turned out to be the winner. I wasn't ready to relinquish my title. I didn't want to hurt one of my imaginary friend's feelings. A few more card games the next day claimed Chunnie to be the winner. I was a gracious loser. A few more card games after that and Winnie was the winner. Losing my title turned out to be okay. There was always another card game to conquer.

Thinking back, my mother used that phrase of hers just when I needed it. In the mornings, more often than not, "quit your lollygagging" was the last thing she'd say to me when I was late getting outside to meet the school bus. I was never that much into school. I would have preferred staying home but with that stern voice of hers, she'd bring me back to the reality that the bus was waiting for me with the swinging door wide open. When I was a senior and undecisive of my next move, my mother again told me to "quit your lollygagging."

Posted by Barbara Briggs Ward at 7:51 AM 2 comments:

Guardians of the Farms 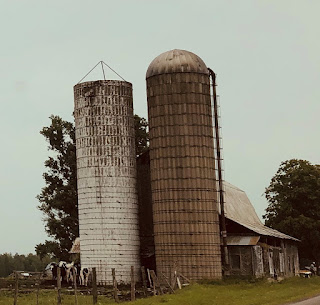 Towering over fields bare in winter and lush with produce in the summer, silos stand tall as children go by in yellow buses. They stand tall as farmers do their chores and families grow and babies become adults and the cycle of life and silos begins all over again.
They stand tall as lovers whisper when passing by and funerals slowly make their way down a winding country road to the church or cemetery. They stand tall as loads of hay fill the haymows and cows graze in pastures and another sunrise leads to another sunset and seasons come and go and the wind howls and neighbors move.
Some stand tall over abandoned farms. Some stand tall filled with grain. Some slowly crumble to the ground. Whatever the fate of those silent sentinels, those watchers, those guardians of the farms and the fields, they will forever be a part of the rural landscape if only in our memories.
When I was growing up my grandfather no longer worked his farm. There were no longer any cows grazing or chickens in roosts. His grain shed was quiet although the tools were still in place ready to be picked up if needed. The haylofts were mostly empty as was the towering silo. My cousin and I would look inside the massive structure. We'd play around it outside the barn.
Today the silo is all that remains of my grandfather's barn. Gone too is his grain shed but I can still smell the grease on his tools and the grain in the bins. It was a treasured place to play and pretend.

Posted by Barbara Briggs Ward at 7:29 AM No comments: 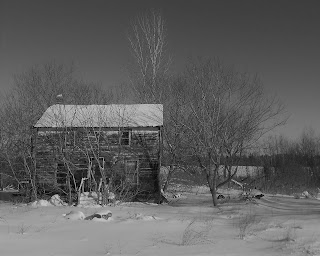 I'm drawn to remnants of places sitting in silence along country roads. As I drive by the haunting structures, I wonder who'd lived there. I wonder why they left. I wonder how they walked away.
Each one of the abandoned places has a story. Just like we do. When you think about it, most of us have been abandoned in one way or another at some point in our lives by someone we loved, by a boss, a friend or a community.
My first realization of abandonment came when my aunt cared for a foster child. A little baby. I might have been twelve at the time. I never knew babies were ever abandoned. I thought they were loved to the moon and back by parents who tended to their every need. I thought they were rocked to sleep in their mother's arms smelling of talcum powder, covered in a soft, precious blanket. It was a rude awakening, followed by another. My sister found a puppy all alone, cold and shaking and hungry in one of the bins in my grandfather's grain shed. I never knew someone could do such a thing to a puppy with floppy ears and wavy hair hanging around its beautiful brown eyes.

Since becoming the mother of a mentally ill son, I've learned even more about the harsh reality of abandonment. Those who suffer with a brain disease face unwarranted stigma every single day.

When you think about it, all it would take to salvage many of those empty structures is some tender loving care. That rings true for people as well. If we were to reach out to each other in understanding, the world would be a better place.

No paint needed. No windows or roofs. Just kindness and acceptance towards one another.

Posted by Barbara Briggs Ward at 10:11 PM No comments: