A Tarnished Piece of Jewelry

I have no clue how I ended up with this treasured piece of jewelry-a pin shaped like a pony that belonged to my grandmother. I remember her wearing it on special occasions-more often than not pinned to a gray/black design knit dress. Besides her wedding band, there were only two other pieces of jewelry I remember her wearing. One was another pin-a small swirl of silver circles entwined about each other and the other-a small, round silver watch (minus the band) on a chain that she wore around her neck-again, on special occasions.
Now tarnished and frail, I keep the pin inside a box underneath some cotton batten in my dresser drawer. I remember the pin from back when my grandparents lived in their farmhouse. My grandmother kept it on top of an old dresser in her bedroom. There were no diamonds or rubies sitting next to it. No array of rings or endless strings of pearls. That speaks volumes about the woman with the little pony pin. Even if she could have afforded all the shiny bobbles, she wouldn't have bothered with them. She worked hard every day-using her hands to do endless tasks. She wore many hats. None required shiny bobbles.
Funny what ends up meaning more than other things that cost a hefty sum. Things like kids' artwork and school papers and hand-scribbled cards and ticket stubs and photos. I have an old mason jar sitting on a shelf in the kitchen. It's stuffed with stones and feathers and pine cones and leaves and twigs and acorns and who knows what else. Every little thing in that jar has a memory attached to it. Each little thing in that jar is priceless-just like my grandmother's little pony pin-now tarnished and frail. 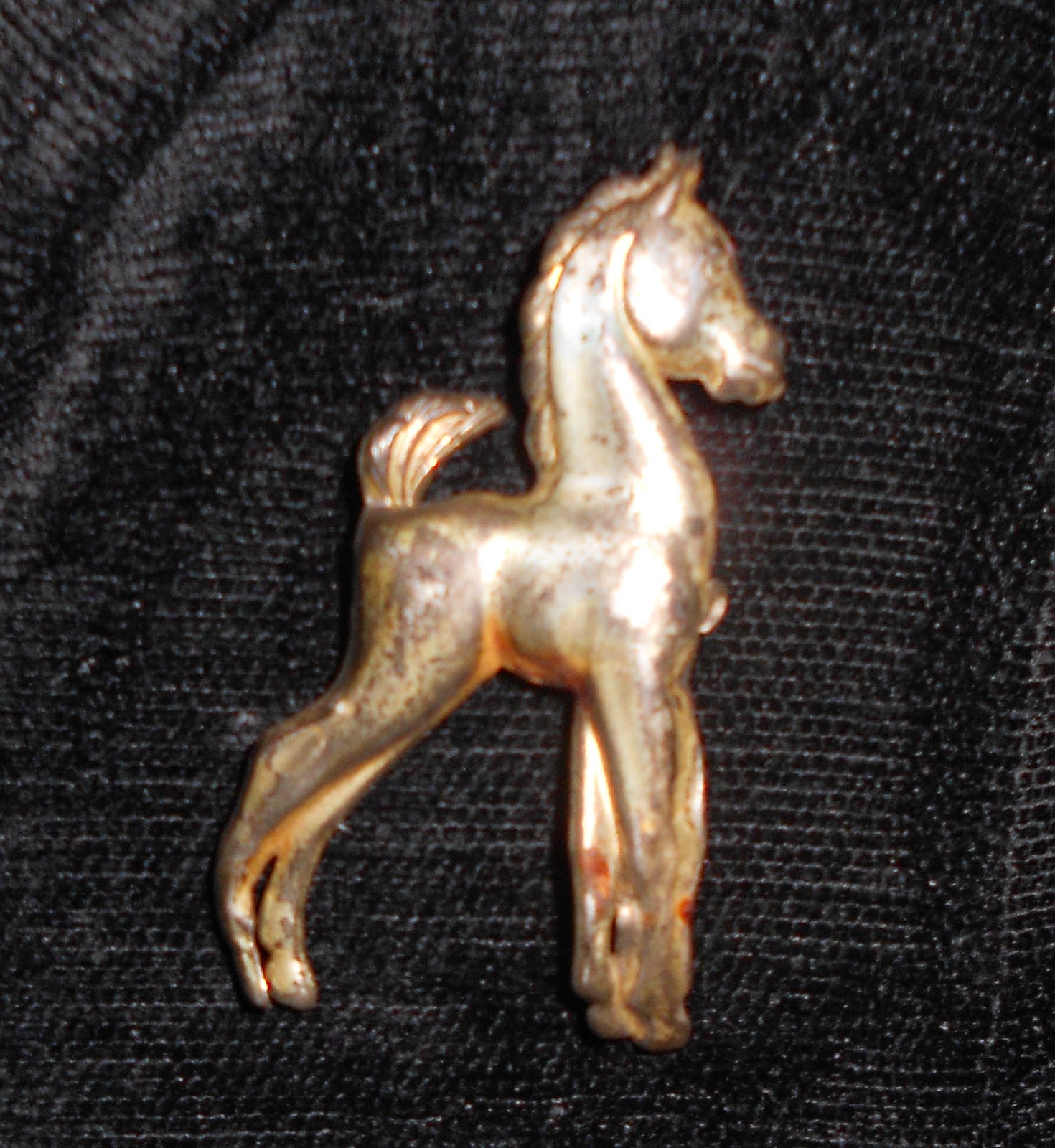 ﻿
Posted by Barbara Briggs Ward at 9:17 PM No comments:

It used to be so much fun playing the Easter Bunny after everyone went to bed and the bags of goodies and surprises were brought out from hiding. Before beginning the process of filling the wicker baskets I'd have a plan. Some of the jellybeans and chocolate eggs wouldn't go in the baskets. I'd hide them behind doors-on window sills-beside pillows on the sofa-on top of the tv or wherever I could put them without being too obvious. Jellybeans would also start a trail at the top of the stairway-leading all the way down the stairs and straight to overflowing Easter baskets waiting in the living room. Once the baskets were examined-and then examined some more-the hunt for the hidden candy began. The race was on! Who would find the most?
It really never mattered because the baskets already had more than enough of the eggs and jellybeans-along with marshmallow chicks, lollipops, candy bars, chocolate bunnies, Cadbury eggs and candy cigarettes. Yes that's right-packs of candy cigarettes that were replicas of the best sellers of the day. The Easter Bunny brought cigarettes! And that's not all-the Bunny brought bubble gum cigars as well!
When I was growing up we always had candy cigarettes in our baskets. It was so much fun pretending to be smoking them. We had our favorite brands. Back then we knew them all because they were advertised on television.
How things have changed. I can't imagine finding candy cigarettes in a basket on Easter morning these days. They probably don't even make them anymore. But quite honestly, those sticks of candy were really just that to us. It was the pretending that was the fun because that is what kids do-they pretend. They use their imaginations. We certainly did. My favorite brand was Winston-as the TV commercial jingle said-'Winstons taste good-like a cigarette should'!
(And when I grew up I never smoked cigarettes-not even a Winston!)

Posted by Barbara Briggs Ward at 10:53 PM No comments: