A favorite movie is like an old friend. You are always happy to see it again.
We all have favorite movies we could watch over and over to the point we are able to say the lines as the actors say them. Great acting is the ability to take a character and turn that character into a real person contributing to a story that flows seamlessly in the eyes of those watching. To the viewer, the actor is not acting. The actor becomes the character. And when that happens, the movie-going experience stays with you for days-for years-after seeing the film. You find yourself wondering about that character. You find yourself replaying parts of the movie in your head as you go about your day. When a movie stays with you long after the experience of watching it, then that to me is a sign of not only great acting but great writing as well.

I loved going to see 'Gone With The Wind' with my uncle. I loved the final scene in 'Baby Boom' when the mother returns home and finds her little girl playing in the front room-picks her up and sits with her in a rocking chair. But there is one movie that has stayed in my heart for years and that is where it will remain. I can still repeat the lines. I can still feel my heart skip a beat-maybe many beats-as Robert Redford meets Barbra Streisand in "The Way We Were" and their story unfolds. I still for the life of me can't imagine how 'Katie' felt when seeing 'Hubbell' sitting on that bar stool half asleep or how her heart must have flipped when he interrupted her dancing with someone to be able to dance with her. The goose bumps still come. I still cry when thinking about the last scene as they embrace and Hubbell turns away and leaves Katie on the street corner. I questioned-'what if'-for years.

I haven't been to see a movie in a theatre in years. My hometown is lacking one and I don't feel like travelling to see a movie. I don't use Netflix or devices for viewing movies. Except for the evening news, I don't watch TV so I don't sit down to watch movies there either. I can't comment on movies I haven't seen. Many I would like to see-but haven't. What spare time I do have goes to writing. I guess that's like going to the movies in my head-seeing the scenes and then putting them to words. I've rewritten the ending to "The Way We Were" several times in my head-turning it into a fairytale ending. To be truthful, I like the movie version better. It's real-gut-wrenching, tear jerking real-and that is life as most of us know it to be. Everyone has 'what-if' moments. It's how we deal with them that matters.
Posted by Barbara Briggs Ward at 10:32 AM No comments:

February Nuptials at the Farmhouse 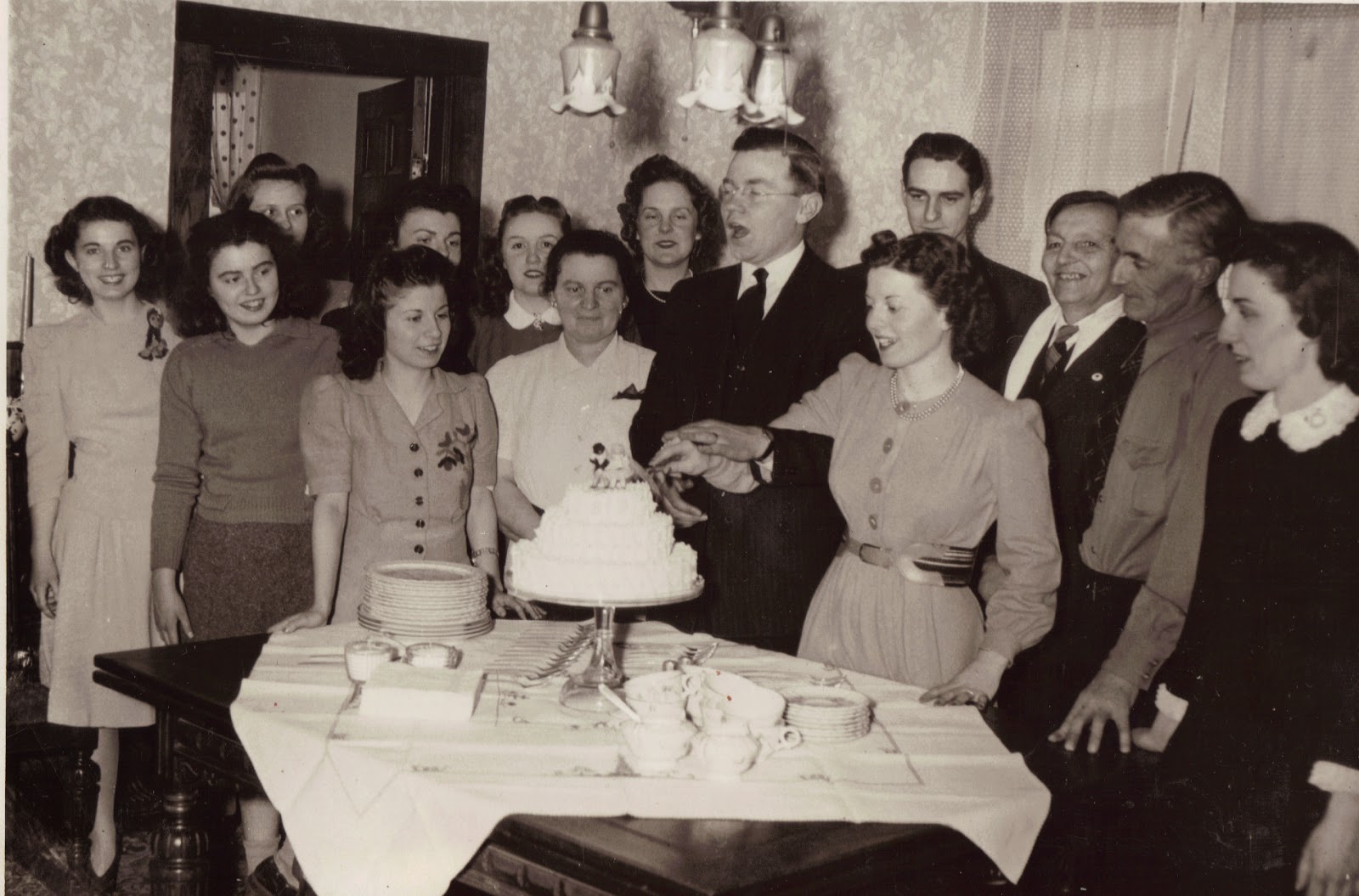 My parents were married in early February of 1942. They celebrated their marriage at a small reception in the dining room of my grandparents' farmhouse surrounded by immediate family. My mother's five sisters all look so beautiful. Right beside my mother is her father-a hardworking man who worked from sunup to sundown 7days a week. My mother was named after him. She'd work out in the barn right alongside him after school and on the weekends. My grandmother is standing beside my father. She too was a hard worker. If ever she had a spare moment she'd be using her hands to create-sew, crochet, mend, braid rugs, cook, garden and so on.
I can't tell if my father is singing as he cuts the 3-tier wedding cake with my mother. Something tells me he could have been as he was known around the town as a crooner-a singing waiter before becoming a licensed funeral director. I remember my mother telling me they were married on a Tuesday. I never knew the reason why. Maybe it had something to do with my grandparents running the farm. I really never thought anything of it. I do know they honeymooned in New York City. They had a suite in The New Yorker. I still have one of the souvenirs they brought back home-an ashtray from their hotel. My mother loved the City. She told me they went to some shows while they were there. And then there were all those stores.

I've often thought my mother would have loved living there if her path had taken a different direction. She had a creative flair about her that surfaced now and then. One such time was when she opened her fabric shop which, in turn, led to her going to New York to buy fabric in the Garment District. I was lucky enough to have gone with her a few times. It was quite exciting! So busy-so many rolls of fabrics and interesting characters. My mother had a flair for fashion. Some would say she had expensive tastes. When I was little I loved going through her blue, velvet jewelry box. I felt like a princess trying on all the glittering bobbles.

I guess we all can say that about our lives-what we would have done if our live had taken a different direction. Truth was my parents fell in love. They worked hard. They bought a house on a lane and started a family. My mother worked nights as a registered nurse so my father would be home with my brother and I. Eventually she worked her way up to Head of the ER. As the family expanded we moved out to the country-right next door to the farmhouse where they cut that cake and celebrated with family and friends. Life really does go in circles.
Posted by Barbara Briggs Ward at 4:13 PM No comments: 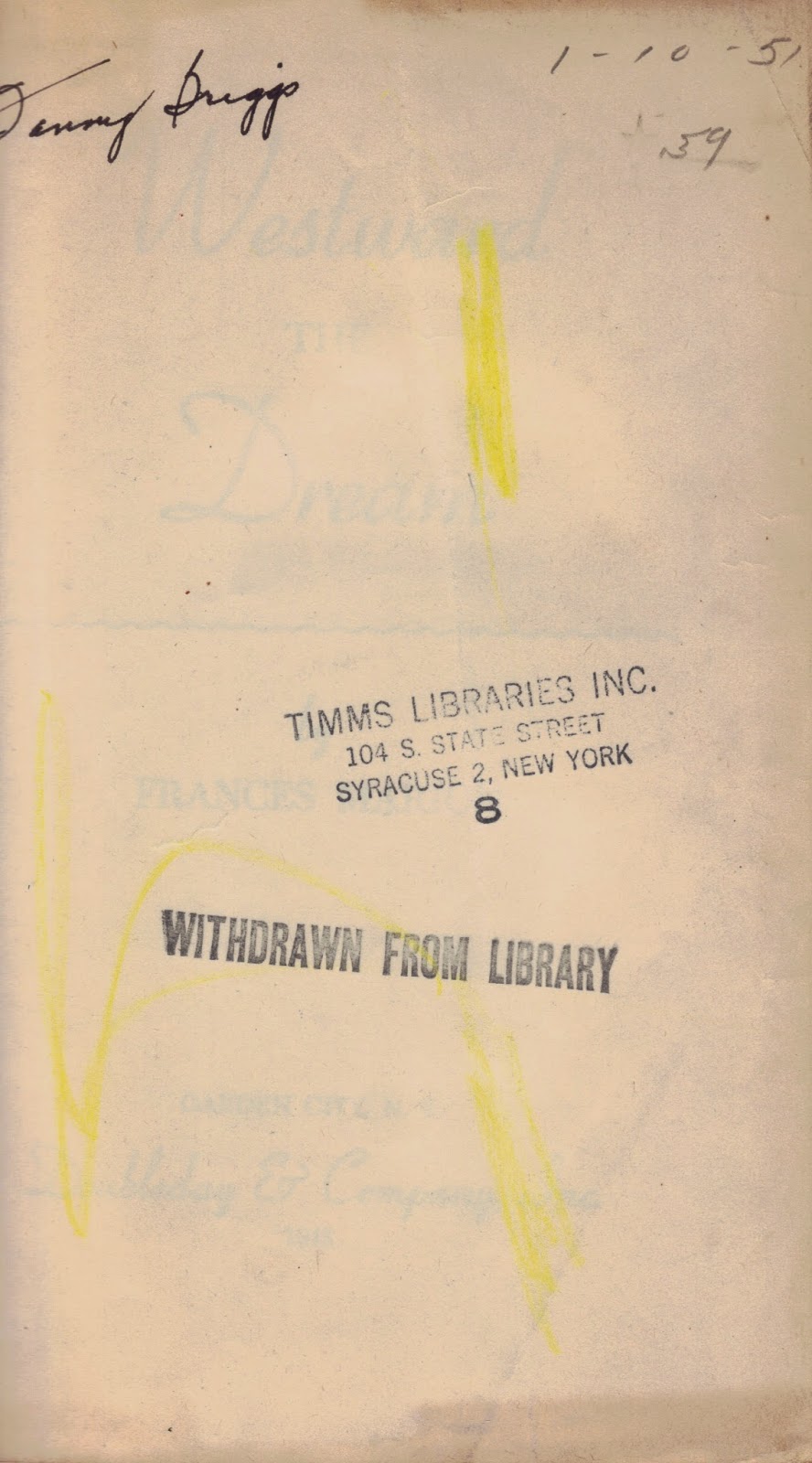 My mother was an avid reader. I've written before about going with her when I was a little girl to a small bookstore located inside a fancy department store of our hometown. I was writing from memory since I'd never seen a photo of that location because our downtown was leveled in the '70's when urban renewal was the thing to do as shopping centers were springing up all over-changing the way people shopped. A few weeks ago I finally saw a picture of where that amazing little bookstore sat on what used to be our main street full of hustle and bustle with people engaging in conversations and people taking a break for a soda at the soda fountain or lunch where locals gathered. Looking at that worn photo I was saddened to learn I pass by that location quite often and never realized that's where that little bookstore was located. Since finding that out, I've driven by there several times-slowly down to imagine that magnificent department story that no longer exists. There's no evidence it ever existed. There's nothing there at all except empty bottles and candy wrappers and old papers and other bits of trash discarded without thought. It saddens me to think the younger generation will never know what was there. But when you think about it, so many, including the younger generation, now go to the internet for books-or to all sorts of devices void of a front door leading to a little bookstore with a front window full of little window panes where books were displayed in such a way you couldn't wait to get inside and become immersed with books that you could hold and feel and get lost in-then take them home and after reading them, you put them on a bookshelf with your signature inside-claiming it for all time. That's what my mother did with any book she bought from wherever she found it. And I am the lucky one to have many of those books now sitting in my bookcase in the front room-all with her signature.
Posted by Barbara Briggs Ward at 9:45 PM No comments: