We Three Kings and my Older Brother 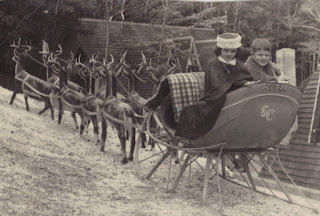 I can't remember what grade my older brother-by two and a half years-was in when he was chosen by his teacher to sing one of the stanzas of 'We Three Kings' in the Christmas program at the little grade school we both attended just up the block from our house on the lane. I do remember I didn't think much about it even though I heard my parents discussing his singing with other relatives. That didn't matter. I knew he preferred playing with me over singing. And I was certain he wasn't as good at singing as he was at building forts with me in the front hall.

Our forts were made when closing off both doorways leading to the front stairs by using blankets. I don't know how he'd secure the blankets. I was more interested in filling our secret space. When the blankets were in place we'd take books from our mother's bookcase and put them in our secret spot. I'd run upstairs and bring down some of my dolls and stuffed animals. I don't think having my dolls in our fort bothered my brother. He never said they did. He was too busy defending us from the enemy. We'd play and pretend in that hidden hallway for what seemed like hours.

It was snowing the morning of the Christmas program. When we got to school the parking lot was beginning to fill up. When I stepped into my classroom, the teacher told me she'd heard my brother sing in a rehearsal. She thought he had a good voice. I can't remember what our class was singing in the program. I just remember having to put something in my hair. Shortly after that, we were lined up one by one and led into the auditorium. It was packed. I found my parents near the back sitting with one of my aunts. I waved at them but they were waving at my brother. He was sitting up near the front with his class. He was dressed as a wise man. Everyone thought he looked just like one despite his red hair and freckles.

The program was very long but very good. Just before Santa Claus made his appearance, the lights dimmed. The Principal walked to the center of the stage and announced the next song would be the last song . I knew what it was. It had to be 'We Three Kings." And it was. My brother's class stayed in their seats and sang. When it came time for the third stanza to be sung, my brother stood. A spotlight was right on him. And when he started to sing I was in shock. My brother really could sing! His voice was strong. He held his head high and sang with all of his might. When he got to the end of the stanza, his classmates joined in. When the song had been sung, the auditorium erupted with applause. Everyone was on their feet-including me. I was sure I was clapping the loudest-the proudest as I told my classmates, "That was my brother singing"! I looked back at my parents and my aunt. They were clapping just like me.

My brother's fame never changed him. He still built us forts in the front hallway and he never did complain about me filling them with my dolls and stuffed animals.

Posted by Barbara Briggs Ward at 10:13 AM No comments:

The Best Little Newspaper Ever 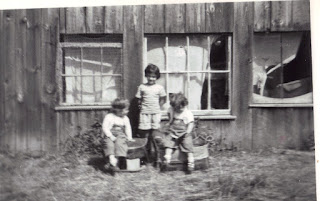 Growing up in the country surrounded by relatives proved to be my own Kickstarter when it came to taking my love of newspapers at a very young age to another level. I don't know if my infatuation was with the smell of the print or everything that a newspaper had to offer from the front page to the last page. Add in flyers and advertisements and the lure grew even stronger. I read all the sections-from local news to national news to sports and special features. When my father brought the newspaper home with him, I was usually the first one to grab it.

My family's home was one of four homes in a row and all those homes were full of those relatives. My grandparents' farmhouse was the anchor. Off in a field not far from the farmhouse was an abandoned chicken coop. That old coop became the center of my universe, as well as my cousins, after the adults gutted it and filled it with the desks, chalkboards, and books from a vacated one-room schoolhouse. We were always in the chicken coop; even in the winter despite snow blowing in through windows with missing panes. We'd play school with imaginary students. We'd put on Easter parades. We'd read books and write books. And from all of this playing and pretending and creating an idea hit like a hurricane.

We'd start a newspaper. And so my cousin and I became reporters, editors, publishers, advertising salespeople, circulation experts and the Sports department. We called our paper 'The Burns Row Journal'. It was named after our grandparents as all those four homes in a row were all Burns' in one way or another. We were a weekly newspaper, publishing on Saturday nights in the chicken coop. There were no computers. We didn't have a printing press so we hand-printed 4 copies of our Journal. We didn't have paperboys or papergirls so on Sunday mornings, we'd deliver a copy of The Burns Row Journal to each of the 4 homes. There weren't individual sections to our pub. It was usually four sheets of loose-leaf paper stapled together and when it came to a new section it would have its own heading. We didn't charge our customers. Each printed edition was a labor of love.

The one thing all of our sections had in common was the fact that every single item in the Burns Row Journal was family-related. Our ads featured a funeral home, a shoe store, a teacher/coach and nurses as all of those professions were represented in those four homes. Our Sports section ran features on anything we considered to be sports. That included baseball games held in the front yard of the farmhouse to swimming in a river down across the road to skating down at the creek. News highlighted anything we could think of family-related and that could have been news briefs on family pets or a special event coming up at the chicken coop clubhouse.

I can't remember when our 'printing press' stopped. Probably when we grew out of doing such a silly thing as hand-printing four copies of what we considered to be our own New York Times on Saturday nights.

(Photo included shows that old chicken coop clubhouse. I am the one standing between two neighbor kids. This is the only photo I have of that amazing clubhouse-home to the amazing Burns Row Journal.)

Posted by Barbara Briggs Ward at 11:37 AM No comments: