The Echo of Piano Keys 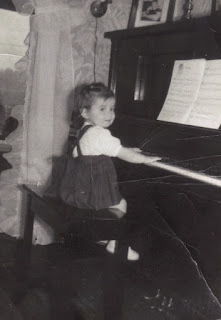 There was a piano in the front parlor of my grandparents' farmhouse. All of us little ones would take turns sitting on the bench pretending to play except for one cousin who really could play. Sometimes I would sit with her. She'd nod her head when it was time for me to turn the page of her songbook. When she put her fingers on the keys and started to play Rhapsody in Blue I'd be mesmerized straight through to the last note. Over the years, I never did learn how to play the piano but I've always loved listening to someone play. I thought I'd heard it all until coming down a narrow flight of stairs to the main area of a local psychiatric center. I was in a hurry. The monthly meeting had run longer than I'd expected.
I was aware of the piano's existence. I'd heard someone playing it awhile back when I was standing-waiting for the elevator to take me to the 2nd floor. But this day was different. There was no hustle or bustle. No one was sitting or sleeping on the benches. There were no clusters of people or attendants walking around. The double set of locked doors were quiet as were those in charge behind protected windows. .As I came flying down those narrow stairs I heard a few sporadic notes. Then, as I opened a door leading into that area, a few more notes struck on those ivory keys lead to even more beautiful notes and soon I was stopped cold. Turning around, I looked towards the piano and saw a young man with his back to me sitting on the piano bench. A bit hunched over-with his head down-his hair in place, his fingers were moving those keys as if they were free-weightless-dancing in a meadow on a warm summer day-feeling the wind-chasing butterflies and laughing without a care in the sunshine. But the young man was not free. Yet that didn't stop him. As I stood there I realized I was listening to a master of his craft. Every key struck-every chord played echoed through that facility with its drab walls and sterile presence-creating a sense of a great stage on which sat a most grand piano player.
When the young man finished he stood and walked away. I started clapping as tears filled my eyes. I'd never heard Rhapsody in Blue played so beautifully.
Posted by Barbara Briggs Ward at 8:45 PM No comments:

The Funeral Director with a Sense of Humor 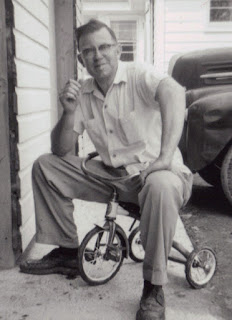 A SENSE OF HUMOR:
All of us have our ways of dealing with life when life doesn't go the way we want it to or when the unexpected comes at us like a hurricane. My father chose humor as his way of dealing. I'm not even sure he knew he did that but looking back, I'm certain that's why he'd do his "Tricky Dick" imitation-and joke with my mother who hardly ever thought he was funny-but we did! My father was a dedicated funeral director. His profession was his passion. The families he served became his families. The care and concern he expressed was genuine. When the phone rang and he was needed, my father was there in an instant. He also loved his hometown. He knew every street-every family and where they lived and who married who and when someone had died right down to the date and where they were buried. It wasn't gossip when he'd go on about a family. It was because he looked upon those families as an extended family of his own.

By virtue of being a funeral director or a member of that funeral director's immediate family, one is aware of that thin line between life and death. You learn the truth in-"You never know"-"Live each day to the fullest"-"Go for it" and so on. I've written before about the call my father received on one particular Easter morning-a call of a family in great need-in unspeakable sadness-as their little girl choked on a jelly bean and died. My father received so many-so many tragic calls as funeral directors do. And my father stayed by those families long after the calling hours were over and the headlines faded.
Perhaps one of the hardest things my father had to do when called upon in his role as funeral director was to tend to patients who passed away at a nearby psychiatric center. His compassion would be on overload for normally there'd be no family involved. He'd be quiet for awhile after their burial-their place in the cemetery marked not by name but by their patient number. That to me is dedication-compassion for human beings most turn their backs on.
Posted by Barbara Briggs Ward at 11:15 PM No comments:

Growing Up With June's Creators


Richard Scarry-(pictured above)-author and illustrator of over three hundred books with over one hundred million books sold worldwide, was born in Boston June, 1919. He lived a large part of his adult life in Switzerland which shows in his amazingly creative artwork. His animals and imaginative houses and modes of travel continue to delight children-and the young at heart. Busytown and the Best Ever series were favorites in our house and remain on my book shelf. My kids and I loved searching for Lowly worm.


Bob Keeshan was born in Lynbrook, NY  in June of 1927. He started out playing Clarabell the Clown on the original Howdy Doody show. Clarabell spoke by honking his horn. To our good fortune, Bob Keeshan had the idea for what became a classic television show for children-Captain Kangaroo. For three decades beloved characters such as Dancing Bear, Bunny Rabbit, Grandfather Clock, Mister Moose and Mister Green Jeans joined Captain Kangaroo in fresh, creative programming that remains beloved by generations. Later on in life, Keeshan became an advocate against violence in video games and joined parent groups in protest of TV shows geared to children based on toys in the market place at that time such as He-Man and Transformers. He felt toys turned into TV shows didn’t teach children about the real world.


Maurice Sendak, children’s writer and illustrator, was born in Brooklyn in June, 1928. Sendak described his childhood as a “terrible situation” because his extended family died in the Holocaust. His love of books developed when he was young and confined to bed due to health problems. At the age of twelve he decided to become an illustrator after watching Disney’s Fantasia and Mickey Mouse. That decision continues to influence children everywhere. Sendak is best known for writing and illustrating Where the Wild Things Are first published in 1963. To date it has sold over nineteen million copies worldwide and has been adapted as an opera, animated short, and live action feature film. Upon his death, Maurice Sendak was called the “most important children’s book artist of the 20th century” by The New York Times.


Eric Carle whose brilliant illustrations of beloved children’s picture books was born in Syracuse, NY in June, 1929. During his career he illustrated more than seventy books and most of those he also wrote with more than one hundred ten million books sold around the world. Carle’s, “The Very Hungry Caterpillar” remains a beloved children's book everywhere.


Whatever it is about the month of June we continue to reap the rewards no matter how old we get. Thinking back to when we were first inspired by a hungry caterpillar or a very busy town or a funny worm with a hat or really wild things or a dancing bear or cute bunny rabbit or a captain who visited our homes on a device called a TV, fond memories are tapped as that place in our hearts called childhood-where we never grew up-is once again visited and it doesn’t even have to be June to go back there.


Posted by Barbara Briggs Ward at 9:18 PM No comments: