Quilts Hanging on a Front Porch 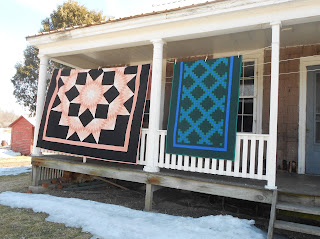 When I drove by the Amish home with quilts flying in the breeze as winter was thinking about turning to spring I couldn't help but stop. With the colors and detailed craftsmanship of those beautiful quilts hanging by clothespins against the simplicity of the home and the barn set off to the side and fields still holding on to patches of snow, the scene was breathtaking; looking more like an oil painting created by a master himself. Of course if it had been created by a master, that master would have had to contend with puddles of yuck and smells of the barn animals and the earth waking up.

On my way home I thought about my mother. She would have loved seeing those quilts flapping about. I know she would have worried they might let loose and end up in the mud. That's because she was a skilled seamstress. Her tailored suits and coats were sewn to perfection. Every dart and every seam; every button and button hole; every zipper and strip of bias tape-all were flawlessly sewn or created. She preferred Vogue patterns. Her material was the finest. And then-there were her quilts.

When my mother was in the process of making a quilt I was amazed at the exactness of every piece she'd cut out. Each had been measured. So many little pieces and she knew where every little piece would go. Her color schemes were breathtaking. It took her several visits to the fabric store to decide which bolts to finally choose. Putting those bolts of fabric together was so time consuming. Colors and designs had to compliment each other. There had to be contrasts but they had to be subtle so as not to stand out. They had to blend. They had to be present without screaming for attention. The end result always took my breath away; just like the two quilts did-hanging from clothespins on an Amish front porch as winter was turning to spring.


Posted by Barbara Briggs Ward at 5:20 PM No comments:

My Favorite Month for Art Class 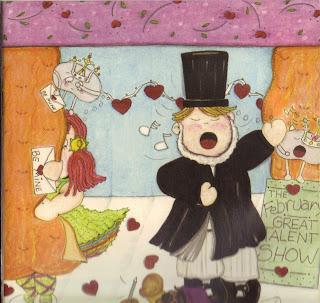 Growing up I always thought my cousin Joe was so lucky having his birthday fall on February 12th. To be born on the same date as Abraham Lincoln was certainly something to celebrate. But that wasn't the end of it. The celebrating continued on February 22nd, the birth date of our 1st President. That was the icing on the cake-the birthday cake that is. And nudged between these two historic dates was Valentine's Day which meant there was a Valentine Day's party in every classroom. Instead of cake, cookies and/or cupcakes were served. February was an overload for celebrating. Whether it was Abe's tall hat or George's ax or bright red hearts, February was made for creating and that's why it was my most favorite month when in elementary school with Art Class being my most favorite class of all.

I had no use for arithmetic. It was too exact. I did like reading but Art Class-that was the class where my imagination was allowed to soar. Using big, fat crayons we'd draw big top hats on large pieces of white drawing paper. Then we'd color them black, cut them out and give them to our teacher. A few days later we'd discover top hats hanging in classrooms, up the stairs and in the hallways. After the birthdays had been celebrated, we'd be able to take out top hats home to hang on our refrigerators.

Whatever one could imagine, that's what a heart became in February in elementary school. Ironically Music class took on a special meaning as well that month due to the fact our music instructor's name was Miss Heart. It really was! And all through that month we sang songs-from the heart with Miss Heart!

Posted by Barbara Briggs Ward at 9:44 PM No comments: