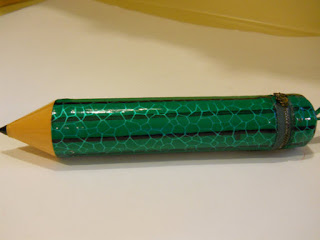 When recently walking down a certain aisle of a discount store, I found myself drawn to all the school supplies filling the shelves. Signs shouting special pricing-great deals-hurry while supplies last-were everywhere as were children with parents obviously immersed in Back to School shopping. And there I was-still infatuated by all those products just as I used to be when I was the one taken to the store to shop for Back to School. When it was me, it was never the clothes or shoes that interested me. It was always the pencils-the erasers and glue and paper and scissors and notepads and folders. All those aromas of all those things coming together was exciting to me. Besides going back to school, it meant spending even more time at my desk in my bedroom-writing-drawing-creating whenever I could.

Back then there were no official discount stores. We had a Newberry's and a Woolworths. They sat side by side in our downtown. Everyone would go from one to the other when doing Back to School shopping. Both had soda fountains. Both had lots of school supplies. Newberry's even had an escalator!

There was only one item that I took my time in choosing from all those others on the shelves. And that was a pencil case. I loved pencil cases. I loved them all. Some had zippers-some had drawers. The drawers were fun to fill with crayons and erasers. I had so many erasers. Some were pink and some were gray. The pink tasted the best! Some pencil cases had a plastic ruler on top that you'd slide downward to get your pencils sitting inside. I had a few of those. My very most favorite pencil case ever belonged to a friend when I was in kindergarten. It had all sorts of drawers full of chubby crayons. My friend always used his own crayons when we did projects. The rest of us used school crayons filling a box that sat in the middle of the table. I remember thinking how lucky that boy was with all those drawers and all those crayons. Even now-whenever I see him-I think of that amazing pencil case with so many drawers and chubby crayons that were the envy of a kindergarten class in a neighborhood school so long ago.
Posted by Barbara Briggs Ward at 11:24 PM No comments:

Reading, Writing and What! 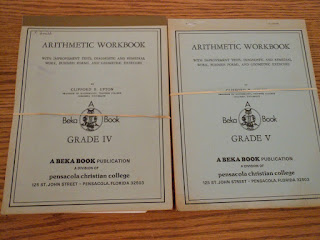 I never knew about the left side or the right side of the brain when growing up and despising arithmetic. I just knew I could not stand columns of numbers with plus or minus signs or some marked with an X or others with another sign. I never had enough fingers to use when counting. There was no wiggle room when getting the right answer. It had to be exact. Two and two always equaled four. This thing called exactness was why I preferred English-preferably writing. There's lots more freedom. You aren't tied to a formula. Your answers-your essays-whatever it is you write-is all yours. No one else will have the exact same story or essay as yours. I liked that. Life is not exact. Why should what you do be exact?

My distain for arithmetic-for adding, subtracting, multiplying and dividing-took a nasty turn once I had to take Algebra. My disdain for exactness had met its match. I was horrified by formulas and rules that made no sense and questions I did not understand. My mother asked my uncle-a high school Biology teacher-to help me but he couldn't. Oh he tried but most times I'd run in my room crying and screaming to the world how I hated everything-in particular, "Dumb Algebra."
I failed Algebra the first time I took it. I failed it again the next year-and that landed me in summer school. I was miserable. I was stuck in school just because of that exactness. I'd made up my mind I was only going to fail again-until the patience of a little old man who was the instructor turned my life around.

At first I thought he was useless. He'd stand there-so short he could hardly write on the chalkboard. His voice was low pitched so I couldn't hear him but I didn't care-until the day he returned our first tests individually to each of us. When he put mine down on my desk he asked me in his low pitched voice to stay after everyone left. I thought this was it. Numbers and formulas were finally going to do me in. Boy was I surprised. In the silence of that room when it was just the two of us, the little old instructor told me I reminded him of himself when he was my age. He told me he'd built up a wall around himself-convinced he'd never be able to do math because math demanded the right answer.

"There was no wiggle room," he told me.

That got my attention as he told me Algebra was easy. All I had to do was learn the basic formulas and he was willing to spend time with me while I got them. And he did! And I passed! I even went on to take Geometry and I passed it as well but that was the end of my math career. I will forever be thankful to that instructor who bothered to spend time with me and teach me the basics. He certainly was a fine example of what teaching is all about.
Posted by Barbara Briggs Ward at 11:57 PM No comments:

Ironing in the Summertime-Turning Wrinkles into Magic 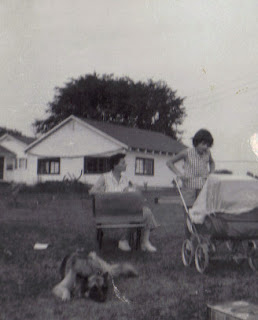 When I was twelve, my mother gave birth to my younger brother in the month of May. Shortly after that she was stricken with a blood clot in her leg and hospitalized for a good part of that summer. Thankfully we were surrounded by family. I pitched in the best I could. Once school got out, that summer was all about pitching in. That's when I started to do the ironing.

I'd watched my mother iron. It was more of an art form to her and to her mother and sisters. Whatever it was that my mother was ironing, she'd spread it out on her ironing board as if getting a game plan together in her head as to how to approach the item. Then she'd pat it down-wet her finger and then touch that finger to the iron. If it made a sizzling noise it meant the iron was hot enough for her to proceed. Back then, the ironing board was either up all the time or close at hand because everything was ironed. Bed sheets-pillowcases-towels-everything or anything was ironed. I'd learned the basics just by watching. Now it was my turn-and that included my father's shirts he'd wear to work at his funeral home. But that didn't bother me. I knew what to do.

In the afternoons I'd set the ironing board up in the living room. With both the iron and the TV on, I would stand there for a very long time and iron. Beforehand in the morning-after doing the dishes and then the washing and the drying of the laundry, I would take my father's good shirts and do as my mother always did. While holding a shirt in one hand, I would sprinkle water on the shirt and as I did I would tuck the sleeves in and eventually as I watered it, the shirt would end up being rolled into a tight ball. After the towels had been ironed and folded-after the sheets had been spread out and ironed and then folded and folded again and ironed-as well as the pillowcases and everything else in the laundry basket, it would be time to do the shirts. This became the fun part to me. Every shirt was a challenge. They had to look the best they could. My father was counting on me.

One by one-I'd unroll them. If I thought a shirt was too dry I'd sprinkle it again with water. Then I'd begin-starting with the sleeves-then the fronts. Then I'd spread the back out on the board. Moving it along, the back of the shirt would be ironed. Then, spreading just the collar out, I would carefully iron the collar-trying to avoid any creases. After the collar-came the best part of all-ironing the shoulders-bringing it all together with a neatly ironed shoulder crease. After I'd finished the process, I'd hang the shirt up to dry-and start in on another.

Ironing was never a chore to me. I felt like a conductor of an orchestra-lining the items up and turning wrinkles into magic. A part of my reward was the smell of the iron working those wrinkles out. To this day I love that smell. It takes me back to those summer afternoons ironing in the living room with the TV on.
(The picture above shows my mother just out of the hospital and me rocking my baby brother to sleep in his carriage. I was probably in a hurry. I still had the ironing to do!)
Posted by Barbara Briggs Ward at 8:34 AM 3 comments: