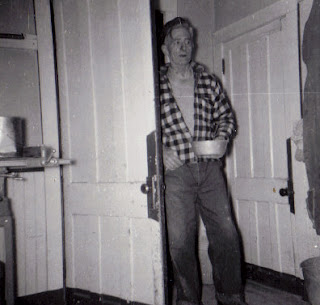 It was another beautiful morning. I was up early-at the post office getting my mail out of my postal box when I noticed an older gentleman walking into the building. He had a cane and was wearing a face mask. As soon as he was inside, another older gentleman wearing a face mask and making copies at the copier, turned to see who was opening the door.

By the boisterous hellos, it was obvious they knew each other.
“Well look who’s here! How you been old guy?”
“Oh you know. Tryin’ to stay home but I gotta pay my bills.”
“Know just what you mean. I make copies of mine.”
“I was thinkin’ earlier. This would be a great time to rob a bank! With everyone wearin’ a face mask, you’d never get caught!”

They both started laughing in the old post office that had stood witness to so many catastrophic events in this country’s history.

Then the older gentleman who’d walked through the door continued as he adjusted his face mask. “I’m tempted sometimes to take this thing off. Makes it hard to breathe.”
“No! You can’t do that. We’re only in the third inning. Keep your face mask on. You don’t know who’s a good guy and who’s a bad guy, if you know what I mean.”
Their small talk and laughter continued as I walked out the door.

My next stop was the grocery store. Standing in front of the meat case, with signs posted concerning limited quantities on some items due to Cova19, I thought about news reports concerning slaughter houses around the country where so many of their employees had been stricken with Cova19. As I continued to stand there, another older gentleman happened by. He was wearing a face mask. The fabric was all kittens. He didn’t hesitate to pick up a few packages of hamburger. Then we started talking. Turns out he’d been a farmer all his life. I told him my hesitation in buying meat.
“Check the expiration date,” he told me. “If ok, buy what you want and cook the heck out of it. That’ll kill anything, even that virus!”
“Thanks,” I told him. “I like your face mask.”
“My granddaughter made it. She knows I love kittens. Her mother told me she made quite a few for those who needed them. Well, it’s been nice talking with you. Stay safe.”
I picked up some packages of meat. When I got home, I cooked the heck out of it.”

I’ve been thinking about those three older gentlemen. They reminded me of my grandfather, especially the farmer. I remember hearing stories of how my grandparents and family would gather around the radio in the evening to listen to news after the Pearl Harbor attack and during WW11. I remember hearing stories of very tough times on their farm and in the country. I've been wondering what my grandfather would be doing during this Corona Virus pandemic. I suspect he'd be doing what he had to do just like the three older gentlemen I met the other morning, even if that meant wearing a face mask made from fabric with a kitten design.
Posted by Barbara Briggs Ward at 6:35 AM 2 comments:

Having Fun With Stilts 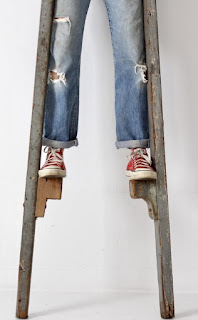 I don’t remember who made the pair of stilts my cousins and siblings and I played with when growing up out in the country. I do remember how much fun we had with them. The stilts were kept in my grandmother’s garage which was always open so we were able to get them whenever we wanted to.

The wooden stilts were painted gray. There was nothing fancy or mechanical about them. They were just gray with chunks of wood added for foot rests. Funny how such a simple thing could bring so much fun. But they did. Even my older brother would walk around on the stilts and he hardly ever joined us when we were outside playing which was most of the time. That just reinforces how much fun we had, taking turns walking around on those gray wooden stilts.

My grandmother’s driveway was crushed stone so if whoever was using the stilts wasn’t careful, a stilt could land on some stones the wrong way and throw the rhythm of walking on the stilts off. And down they’d go. Landing on crushed stone was very painful.
Sometimes we’d have races. Since there was only one pair of stilts, we had to count how long each of us took to determine a winner. Sometimes we’d try doing tricks like holding on tight to the stilts and attempting to jump one or two or maybe even three times with them. Another trick was to walk backwards. Another one was to look as if you were dancing. Of course, getting on and off the stilts was always a trick.

In the spring, we’d march through puddles. In the summer, we’d host circuses outside our chicken coop clubhouse. I’m sure all the adults loved attending our show which included some amazing stilt walking and stilt tricks and stilt marching under the big top which was actually just being outside in the sunshine.

I don’t know whatever happened to those simple, gray stilts. I do know they were lots of laughs despite all the bruised knees and elbows.

Posted by Barbara Briggs Ward at 11:13 PM No comments: