Still Twisting the Night Away 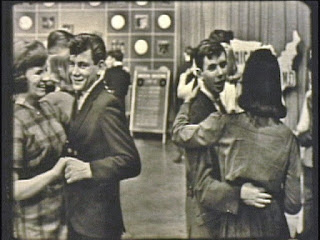 There was a place located in the downtown of my hometown where most all the popular teens-and those who liked to be seen with them and those who thought they themselves were popular-went after school. There was a jukebox and a soda fountain and plenty of room to dance. I only saw the inside of that place one time because of my older brother. He told me I couldn't stay. He told me to go home. I've since figured out that was because of the girls. He didn't want them to see me anywhere near him. That didn't bother me since I had my own thing going on after school right in our living room on the TV set with the b/w screen. And even though I'd usually be taking care of my little brother, I'd still be able to watch Dick Clark's American Bandstand. I'd get something to eat, turn the tube on and get lost in the music, the cute boys dressed in suits and ties with greased-back hair and the pretty girls-some with pony tails and some with hair that flipped up on the end. Little did I realize that most of the unknown singers and groups introduced by Dick Clark on that show would go on to become Music Legends-some still singing today.

I loved  the dance contests. I loved checking out the fashions those pretty girls wore every single day. The problem with that was we didn't have stores where I could go find what I saw. Since that was pre-internet, I couldn't go searching for them-then click, use a credit card and have them in a few days. But there was one exception. When Cher first blasted on the music scene with Sonny, singing, "I Got You Babe", I was desperate for a pair of bellbottoms and a short-sleeved, rib sweater just like hers. To my amazement I found them in our downtown. And even more amazing, my mother bought them for me.

Probably the longest lasting effect that show has had on me is the dancing. Back then, dancing was how I kept my little brother happy. I'd pick him up and twirl him around doing the jitterbug. We'd cha-cha and do the stroll. He'd laugh out loud as we did the twist-the mashed potato-the wah-watusi.To this day I'm still dancing. It might be in the kitchen while getting dinner. It might be in the dining room folding laundry. Point is I'm still strolling and jitterbugging; twisting the night away or doing the cha-cha and I don't even need a partner. Dancing never gets old and neither does the thought of American Bandstand with those cute boys dressed in suits and ties with greased-back hair.

Posted by Barbara Briggs Ward at 12:31 PM No comments: 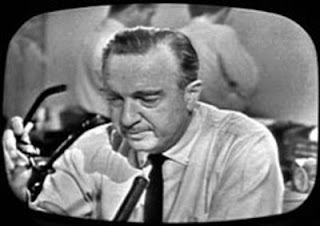 Growing up, every evening of every week day at 6:15 I would join my father in front of the television to watch the 15-minute news cast featuring Walter Cronkite. We wouldn't be watching the news. It was always "time for Walter Cronkite." The picture was a bit fuzzy and always black and white yet that determined voice always came through the screen. It was a voice we grew to trust. It was the voice, as pictured in this post, of a newscaster struggling to tell his audience that President John F. Kennedy had been assassinated in Dallas, Texas. Every time I watch the video of that dreadful moment in our history narrated by a man we trusted I cry right along with him.

To think that networks were able to condense all the news into 15-minutes which had to include advertising is amazing when considering today's 24-hour news channels trying to blast the loudest as they all compete for our attention. Of course back then, today's constant in-your-face reporting did not exist. News stories were not sensationalized or repeated over and over again nor were there reporters on the scene, carrying their coverage to extremes, trying to beat other networks for ratings, trying to sway their audience by taking their reporting a bit too far. Back then there were no gimmicks for your attention. It was news. Reporters were not celebrities. They were hardcore news reporters digging and searching for the truth without emails and cell phones and computers. I miss that type of reporting. I am not impressed by women with tight dresses sitting on a sofa spewing innuendos or men sitting by their side doing the same. Give me a reporter who offers facts and not opinion. From that, I can form my own opinion.

I often wonder what Walter Cronkite would think of today's news conglomerates. I'm glad he doesn't know what has happened to the nightly news or most news. I loved watching those 15-minute news casts with my father. Right after dinner we'd turn the TV on and get ready. It always seemed so much longer that those 15-minutes. I think that was because Walter Cronkite was good at what he did. And that was reporting the news without bells and whistles.

Posted by Barbara Briggs Ward at 11:07 AM No comments: