The Magic of a Desk 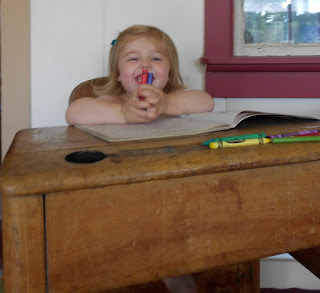 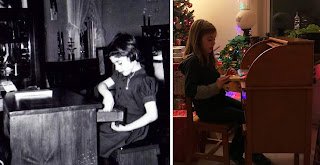 It was the Christmas when I was seven that I found a desk under the tree with my name on it. I’d smelled the shellac when hurrying down the front stairs. I didn’t know what it was until I was told my grandfather used something called shellac when making the desk out of pine. It had two shelves on the right side and a single drawer in the front. When I opened the drawer I found a pad of lined paper with a No. 2 sharpened, yellow pencil. From that moment on I considered desks to be magical.


My best friend back then was an only child. I loved running through our side yard to go play with her. Once inside the pale yellow house with a back stairway that took us up to her bedroom, we spent time not only in her room but spare rooms full of stuff as well. Going from one room to another we’d have to walk by a desk sitting in a nook all by itself. It was my friend’s desk. It was a roll top desk and whenever I could, I’d sit in the chair and pull the top back and be taken away by the magic of what was in front of me. It had all sorts of cubbyholes and drawers jam packed with things. There were coloring books and small diaries to dot to dots and mazes. There were crayons to colored pencils to pencils kept in a pencil holder that I would have died to have sitting on my pine desk. There were little treasures that held a special meaning to my friend kept out of sight in cubbyholes. The scent of the wood mixing with the crayons and pencils added to the magic. I remember thinking if it was my roll top desk I’d keep it beside my pine desk in my bedroom. While I loved my pine desk there was something intriguing about a roll top desk; being able to pull that top back and be taken away to a place of imagination and creativity. Those cubbyholes and drawers offered possibility; a free ticket to the land of make believe.


Desks continued to cross my path as I grew older. I’ve written many times about the old chicken coop void of chickens at my grandparents’ farm and how my aunts and uncles and parents and grandparents bought the remains of a one-room schoolhouse that had been closed for years and put it all inside the old chicken coop. That included chalkboards; books and desks-so many desks and they all had an ink well on top along with an indentation to hold pencils in place. My cousins and siblings and I played in that chicken coop turned clubhouse-turned pretend school-turned pretend everything-all year long; even when the snow came through the cracks in the walls and around the edges of windows that didn’t quite fit. Those windows were good enough to keep the chickens inside when chickens called that place home but the snow and rain flew right in.


Later on in life my father had a desk; an antique desk that I fell in love with as it was so full of cubbyholes and shelves and drawers. You could pull down a leaf in the center of the desk; grab hold of a chair and sit and write. That’s just what I did. I now have the small desk from the chicken coop clubhouse and my father’s desk in my home. Inside one of the cubbyholes of my father’s desk are some of my father’s blue Christmas bulbs still in the package. They are the old kind; the bigger ones. They were my father’s favorites.


I am blessed with two grandchildren. The oldest now eight has been intrigued by both the little desk from the chicken coop clubhouse and my father’s antique desk. She’s sat at both desks; playing, coloring and pretending. She is quite artistic; loves to draw; loves to read. A year ago Christmas when she was seven I decided I would give her a roll top desk with cubbyholes and drawers. The only problem with that was it never arrived until January. I was going to give it to her for her birthday in June but decided the desk was meant to be discovered under a Christmas tree. And so this past Christmas that roll top desk hidden inside a massive Christmas decorated bag was waiting for her by the tree when she came for Christmas Eve dinner with her little brother and mommy and daddy and her other grandparents who’d travelled here to spend Christmas with them. Once dinner was over, the magic began. While her little brother-a most dedicated fisherman-was busy unwrapping his own surprises, that eight-year old unveiled a roll top desk-her very own roll top desk with all the cubbyholes and drawers full of stuff. Her reaction was priceless. It was love at first sight.


That roll top desk now sits in a nook inside her bedroom. Let that free ticket to the land of make believe and imagination and creativity that only a desk can offer take her away over and over again.


(Pictures attached show my granddaughter when she was younger coloring at the desk that was in the old chicken coop clubhouse. Also included is a picture of me sitting at my pine desk on a Christmas morning long ago and my granddaughter sitting at her roll top desk this past Christmas Eve).

Posted by Barbara Briggs Ward at 7:47 PM No comments:

I don’t remember when I started the Christmas tradition of making gingerbread boys to fill a few of my old tin cans but that doesn’t matter because today the tradition continued. 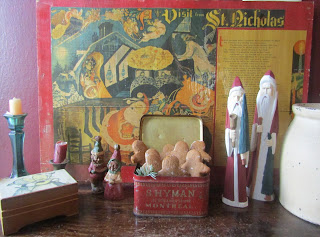 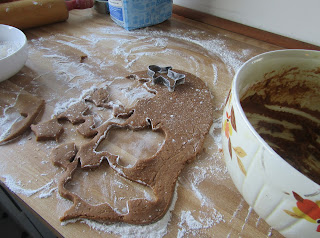 I’m sure the gingerbread boys don’t look like much of a tradition sitting in those old tin cans; faceless and awkward, without icing hair or icing eyes or icing mouths or icing buttons down their fronts. Some are plump. Some have hands or feet that don’t match. One gingerbread boy left one of his arms in the cookie cutter and I had to perform emergency surgery. But to me they don’t need to be perfect. Nothing’s perfect. To me it’s the feeling I get when seeing them sitting in those old tin cans in celebration of Christmas; sitting there faceless yet oh so full of the spirit of the season without frills or fancy ribbons or designer names attached. They’re never eaten or dunked in coffee. They just sit there in their old tin cans as the snow falls and the north wind blows and Christmas comes and goes. They stay put through January. Then off they go to wherever faceless little gingerbread boys go once removed from their old tin cans.

Christmas Ornaments from Long Ago 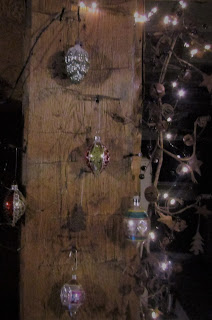 I remember the evening my parents walked into our house situated on a lane with their arms full of bags and boxes; some wrapped and decorated with curly ribbon. They’d been downtown Christmas shopping. They’d been gone a long time. While our father took the babysitter home, our mother told my brother and me to go upstairs and get our pajamas on; then come back down and stay in the living room while she put things away. I watched her put one box on the dining room table as I hurried up the front stairs. When our father returned, we were told to sit by the tree in the living room. I could hear them whispering in the dining room. Then in they walked with my mother carrying that box she’d placed on the dining room table.


Sitting in a chair by the tree my mother handed the box to my father. I can see him standing there still wearing a tie. He was always wearing a tie. Sometimes he’d be wearing a tie as he strung the tree with strands of blue lights. My father loved those blue lights. But he wasn’t stringing lights that night. Opening the box he was holding, my father slowly took out one precious ornament after another. They weren’t like any other ornament already in place on the tree. Each looked hand-painted. Each presented a unique design. They all shimmered under the blue lights. As my father hung the ornaments high up on the tree, my mother explained the box my father was holding was the last box of those beautiful ornaments for sale in the store. I remember feeling so happy that my parents bought that box. It felt as if they’d brought home a hidden treasure. In a way, they did.


Once all those ornaments were in place, we took a moment to enjoy the tree; to take it all in as those sparkling, shimmering ornaments glistened under the blue lights; adding to the splendor of the tinsel my mother had methodically put in place and the other ornaments already on the branches. It was a glorious moment, even for little kids awaiting Santa Claus.


Now years later I am blessed as keeper of those precious ornaments. I think my parents would be happy to know I don’t hang them on the tree. Instead I put them out for all to see. I can look at them as I go about my day. I can tell their story to those who might not notice them on the tree with all the other ornaments. And when Christmas is over for another year, I will take them down and pack them up in that box my father held as he placed those ornaments on the tree. The box and those ornaments came from Woolworths located in a downtown of long ago.
Posted by Barbara Briggs Ward at 7:39 AM No comments: