Whiskey slings to the rescue 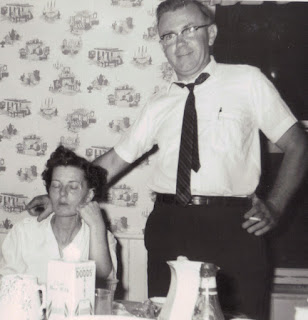 Growing up I never understood how my mother could get irked by my father. To me, he was near perfect. He had a sense of humor. He never yelled at us. He always gave us whatever we asked for. Over summer vacation, I'd stay up and watch the late movie with him. My father most always fell asleep. When we were old enough he'd let us drive his old funeral van around the backfields. Once I had my license he let me take whatever car was in the driveway.

One week night when I was in my freshman year of high school, my mother had to go somewhere with one of her sisters. She left my father in charge. The only problem was he had a cold. I had a cold too but it didn't seem to matter. My father was the one sick. He was the one sneezing and blowing his nose. I was too but he retreated to his bed-covering himself up and telling me to turn the heat up because he was chilled. I told him I was too. My father didn't answer. Instead he asked for another blanket. After I got my younger sister and brother to bed I was going to go to bed as well. But that proved impossible. My father had a cold! Stop the world. He was sick!  When I brought him a second blanket I stepped on tissues he'd thrown on the floor. That was it for me. I'd had it. I was irked! I remembered something my grandmother told me after my grandfather had been sick.

Going to the kitchen, I took out a bottle of whiskey. After pouring a good amount of the stuff into a glass, I filled it the rest of the way with very hot water. I added a bit of lemon and nutmeg, stirred it and took it to my father. He loved it! The drink warmed him up. It even cleared the stuffiness in his nose and head. He wanted another. I made it in a flash. When I went back in the bedroom, my father was laughing. He'd thrown off the blankets and was sitting up. Once he drank his second whiskey sling, he started yawning and giggling at the same time. I told him it was time to go to sleep. I covered him up and turned the light out. I think my father was snoring before I reached the kitchen.

When my mother returned, she asked me if I'd had any problems getting my brother and sister to bed. I remember staring at her. She asked me what was wrong. I told her about the whiskey slings and what a pain my father had been.

"He's just a man," she explained. "And when a man is sick, he becomes a baby. Good idea giving him those drinks!"

After that night, I'd sometimes find myself more understanding of my mother when she'd get irked at my father. Especially when he was sick!
Posted by Barbara Briggs Ward at 4:04 PM No comments:

The Howl of A Train 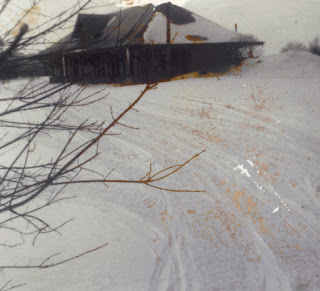 Like so many small communities, my hometown had a functioning train depot many years ago. I don't remember much about it nor do I recall the trains coming and going. I've seen photos and heard stories and understand its history-a history wrapped about our country's history of growing and expanding with people taking the rails to travel-with industries using the trains to ship their goods.
I took the above photo of our train depot more than a few years ago. At that point in time, it'd been closed down. Travelling by train was becoming a thing of the past. Unfortunately my hometown lost this piece of history to a fire. Gone went its marble floors and the hustle and bustle. But one thing that hasn't disappeared is the howling of trains passing in the night.

Living about an hour from Ottawa and two hours from Montreal on the U.S. Canadian border along the St. Lawrence River we are blessed by the howling of trains on the Canadian side drifting over the river, chugging along day and night, 365 days a year. Their rail system is strong. Their depots in hometowns all along the way are open for business.

When I was growing up in the country, my cousin and I spent so much time outside playing and skating on the creek. Many evenings we'd skate under the stars. Even when it was snowing and blowing we'd be down there swirling about the ice. Eventually we'd find ourselves lying atop the ice-talking and laughing. But when that chugging and clanking and howling of a train passing by echoed over the river, over fences, through the fields and trees, we'd stop our talking and laughing and listen. I remember imagining who was on that train. I wondered where they were going. I found myself wanting to go along for the ride. In some ways, I did. Imaginations are wonderful.

I can still hear the trains. They are still passing by over the river. They wake me up. They put me to sleep. They stop me in my tracks. They hypnotize me. They make me feel happy. They can make me feel sad. Whatever my mood, they still make me wonder who is on them and where they are going. Business men. Business women. Families. Lovers. The lonely. I'll never meet them but they feel like old friends. They bring me back to those star-filled evenings skating on the creek with my cousin. Talking. Laughing. Sharing stories until the howling echo drifted over the land silencing us.

They make me long for a depot lost to a fire and a simpler time when a community along a river was serviced by trains coming and going-singing their soulful songs.
Posted by Barbara Briggs Ward at 5:14 PM No comments:

I bet it was a Sunday afternoon 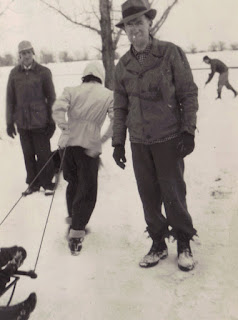 I wish this old photo showed more of what was going on-showed more of who was there-maybe even showed my grandparents' farmhouse with its screened-in front porch because I know that's where this photo was taken. Underneath all that snow is the cinder driveway that led around to the back of that house down to the shallow rock. Shown is one poplar tree. There were more poplar trees lining that driveway back then. I loved when the wind moved the leaves. It was magical. I didn't love the thunder and lightning storm that cracked one of those trees in half on a summer evening when I huddled around my grandmother with my cousins on that screened-in front porch.

Standing in the forefront is my father. What's surprising to me is not the cigarette in his mouth because they all smoked back then. What's surprising is the fact he is out there in the first place appearing to be enjoying himself. And he's not wearing a tie. In fact, he seems to be wearing a leisure sort of shirt-leisure pants, boots, and coat. The hat seems to be a bit out of place. It reminds me of the father I remember. He most always wore a tie and a hat with a feather. Being a funeral director, he was always on call.

I love seeing the adults playing out in the snow. I bet it was a Sunday afternoon. Back then, families gathered on Sundays. Back then kids played outside as well. But you have to remember, back then there weren't electronic devices to grab their attention and keep it. I'm certain my grandmother was in her kitchen cooking one of her delicious home-cooked meals. And when they all gathered, I'm certain they stayed around the dining room table and talked-and talked.
Posted by Barbara Briggs Ward at 10:42 PM 2 comments: