Skating on the Creek 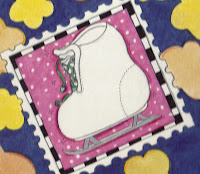 It's one of those things-you don't realize how lucky you were kind of thing until you are remembering it! All winter long we had our own skating rink right out the back door and down the hill to the creek. We didn't have to depend on anyone taking us somewhere to skate inside an arena. We'd bundle up and disappear for hours. I don't ever remember getting cold but then that would have been impossible since we were in constant motion-racing, swirling and twirling in olympic-style fashion. The only thing that stopped us were frozen reeds sticking up from the ice. If we caught our skates on them, down we'd go-but not for long!

Sometimes we'd pack a lunch and follow the creek as far as it allowed. Other times we'd skate at night under the moon and stars. It was breathtaking, with the moon acting as a spotlight and the frosty, snowy fields glistening while twinkling stars danced their winter dance. Lying on the ice, my cousin and I would enjoy the winter night's show from above. We'd talk and share,lick the snow from our mittens and eat icicles gathered from our private rink.

Looking back I believe those times spent skating on the creek defines absolute pure enjoyment-just what childhood should be!
Posted by Barbara Briggs Ward at 9:33 AM No comments:

Labels: Skating on the Creek

For the Love of Hot Cereal!

I really enjoy the fall; can't stand the muggy days of summer or drizzly days of spring-but winter, specifically January, tops the list as my favorite time of the year. It might be the contrast-harshness wrapped in breathtaking beauty. It might be the quiet after December's rush. It might be the welcome embrace of home when walking through the door as the snow flies and wind blows. It might be many things but one thing for sure-hot cereal cooking on top of the stove while toast is being toasted and hot chocolate is being stirred is the most soulful-most heartfelt reason for January to be the first of the twelve months on the calendar.

My grandmother-my aunt-my mother all cooked hot cereal. They each had their variations. Some used brown sugar-some sprinkled cinnamon in the bubbling mix-some served it with cream instead of milk. My grandmother would add a dab of butter when dishing her cereal into a bowl. She used a simple sauce pan with a top that had a dent in it for cooking the cereal. She'd used it for years. My aunt used it too.

On Sunday mornings in the wintertime, that pan made serving after serving of hot cereal-depending on how many grandchildren were there. Many times after we'd been outside skating or sliding we'd stop at our grandmother's to warm up-then go back outside to play. Many times we were served a bowl of hot cereal before leaving.

Besides Oatmeal, we loved Cream of Wheat and Corn Meal. We weren't picky just as long as it was piping hot off the stove served with buttered toast and hot chocolate. No microwave variations here-just spoons full of creamy, delicious hot cereal cooked in a certain saucepan served around the table as the January snow fell and wind blew!
Posted by Barbara Briggs Ward at 9:52 PM No comments: