Beauty Nurtured on a Farm 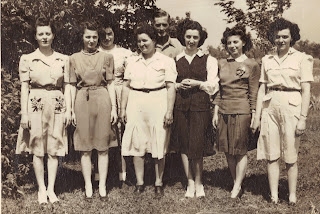 There's something to say about growing up on a farm. It offers one the opportunity to understand and value the meaning of hard work. My grandparents never stopped from sunup to sundown-using their hands not computers-to do all that had to be done inside and outside their farmhouse-inside and outside the barn and granary-and spreading out to fields just over the plank bridge. I've seen photos of my grandfather coming through the back door into the kitchen looking exhausted yet he was back at it a few hours later. He had to be. There was no slacking. Their livelihood depended on it. Of course he was blessed with a great partner who worked just as hard and just as long.

With all the conveniences we have come to depend on-I don't know how my grandmother accomplished so much and got up and did it all over again. But dressed in a house dress, she did it all-even baked and cooked amazing homemade meals every day. During the haying season, she cooked full-fledged dinners that included pies of all sorts, serving them at noon for those working the fields in the blazing sun. I vaguely remember those times-those noontime feasts served in the kitchen. For some reason what stands out to me the most remains a small pitcher of vinegar, sitting on a table covered in fine linen, for anyone who wanted to add it to their salad. I think that remains so vivid because I couldn't figure out why anyone would want to add something that smelled so potent to anything.

With all they had to do-there were six daughters to be cared for and tended to. Looking at the photo, I think my grandparents did an amazing job. True Beauty can't be found in tubes or compacts. True beauty doesn't mean erasing the lines that come with age or going through procedures to nip and tuck. True beauty comes from within and is noticed by all. There will never be a more beautiful woman to me than my grandmother. Her hands were worn from hard work yet her touch was as gentle as a feather and warm as a summer breeze. There's something to say about the beauty nurtured from growing up on a farm. That beauty truly is eternal.

Posted by Barbara Briggs Ward at 7:45 AM No comments: