The Year My Father Ran For President 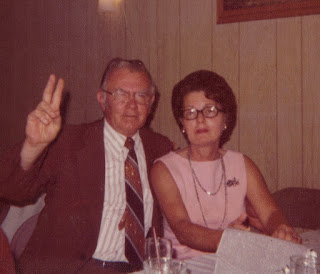 I remember how nervous I was the night before that election so many years ago. I knew with all my heart my father was the better candidate. Now it was up to the voters. While the campaign had been a long, hard battle with late hours and strategy sessions, there's one particular day on the road I will never forget. It was supposed to have started at 9 a.m. but because of having so much to do-needing to gather so much to take along, we didn't get going until after 11:00. You see, the problem wasn't politically related. It had all to do with diapers, bottles, snacks, wet washcloths, gas in the car, and those homemade political signs which meant we needed stakes and nails and lots of patience. There was just so much we needed to take along for the ride that my then sister-in-law and I were late getting out of the driveway and on the road with a car full of babies and toddlers. But we finally headed out, full of hope and change and burbs and dirty diapers.


We did have a plan. We'd stop wherever we felt one of our signs should go. But one particular location was a must-the lawn of my father's opponent which was about 45 minutes away. We knew the address and once we found it, that sign was up and we were gone! And we kept going while bottles with plastic liners were filled with Tang, cheerios were passed around and diapers were changed as the car kept going and laughter mingled with giggles and cries and toys taken from one child by another. While exhausted when we made it back home, we couldn't stop. Babies had to be fed and put to bed before the returns came in.

By the end of that night, results didn't go my father's way. He lost his run-not for the White House-but for Corner of our county. While it wasn't for President, it might as well have been. I was so excited that he took the step-that he put himself out there-that he gave it his all. So to me, he didn't lose. No one ever loses when they try their best and that's just what he did!

It took a few days to clean the car out. Cheerios were everywhere!

(The attached photo features my parents. Please note my father is doing his "Tricky Dick" imitation.)
Posted by Barbara Briggs Ward at 9:12 PM No comments: