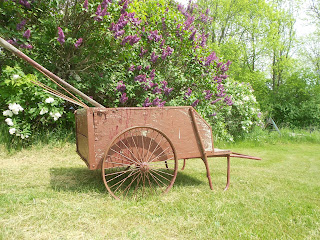 There was never anything fancy about the old garden cart. In fact, most would have retired it by now. Traded it in for an up-to-date model. But that wouldn't be an easy thing to do. You don't discard something just because it's worn-because it lost its shine-especially when it has served you well for forty some years. That's how it is with the old garden cart. Somehow and at some point it became more than a cart. It became a part of the family. And as family members grew old, so did that cart.

Back in its prime the garden cart served many purposes. Besides hauling weeds and shrubs and freshly picked vegetables and sand to refill a sandbox and leaves raked into piles and rocks dug out from the earth and fallen limbs whipped from trees, that garden cart hauled little children and kittens and a dog or two. Around and around a huge garden it would go-up and down a small hill-around a cluster of raspberry bushes and apple trees as giggles and laughter and barking and meowing drifted about an oversized yard. Sometimes a few of the older children would be the ones pulling the cart. Other times it would have been an adult. No matter who was doing the pulling, there were always calls to 'go faster' from those sitting in the cart and holding on as if they were at a carnival and going on a roller coaster ride.

There were quiet times spent in that cart as well. Sometimes one or two of those children would sit in it and play. They'd go nowhere. They'd simply play with kittens or read books or color. Sometimes the cart would be turned upside down and used as a secret cabin-a hideaway in the middle of the yard. Many a peanut butter and jelly sandwich were enjoyed in that cart as adventures unfolded and the cart turned in to whatever a little child imagined it to be.

Due to its constant use-the wear and tear-and uncontrollable weather conditions, the old garden cart has had many repairs and tweaks and overhauls and paint jobs. But its still going. It's still in use hauling weeds and freshly picked vegetables and sand to refill a sandbox-picking up leaves and fallen limbs whipped from trees. But now a sandbox is occupied by grandchildren. And the grandchildren are the ones being pulled about a garden, sitting in the old garden cart, laughing just like the generation before them had done-laughing as they ask to 'go faster', holding on as if they're at a carnival and going on a roller coaster ride.
Posted by Barbara Briggs Ward at 8:39 AM No comments: 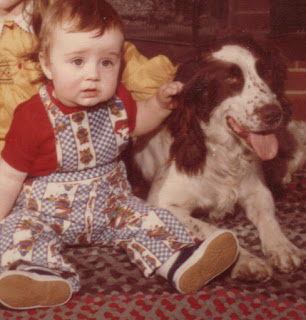 When I was young my cousin and I would play on this braided rug made by my grandmother. It was the biggest of her braided rugs in the home she and my grandfather built once they sold the farm. Sometimes we'd spread out on all fours and try to figure out what garments owned by family members had been woven into the strips of fabric that we were playing on. Creating a braided rug-especially such a large one, was quite the undertaking. Besides preparing the braided strips, our grandmother had to clean the garments and strip them of buttons and zippers. But none of that mattered to us when we discovered those braided rugs were a great place on which to play. And when it came time to find some packs of playing cards and create our card houses, that huge braided rug was the perfect place to do it. The little grooves the rug provided gave us anchors for our creations.

We'd both start by leaning two cards firmly together. After that, we were on our own in designated areas atop the rug. There were no instructions. No plans included inside the pack. It was up to each of us to construct the biggest-most ingenious card houses ever. Sometimes designs would spread out horizontally and then up. Others would just go up and up and up. Some would have garages. Others chimneys. Some had sidewalks or streets out in front of them. Very often card fences enclosed the structures. They were quite the site. No two places were ever alike. Once the building part was complete, the playing began. We'd visit each other in our card homes. Park our cars on the card street. Climb the card fences. Go for a walk on the card sidewalk or ride our bikes or skip our jump ropes. If we were hungry we'd go inside to our card kitchens for lunch. If we got tired, we'd take a nap on our card bed. We had so much fun. But most always that fun abruptly ended when our card creations came crashing down-by our own doing or someone opening a door and creating a breeze or someone moving the rug or an older brother playing demolition derby atop that beautiful braided rug.
(Shown in the photo-2 of my children 'just a few years ago' with their dog)
Posted by Barbara Briggs Ward at 11:20 PM No comments: