Watching The Twilight Zone With My Cousin 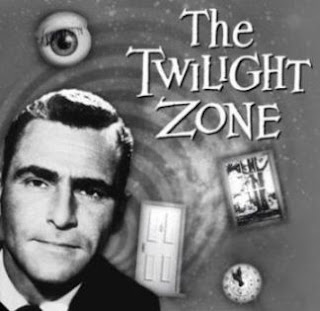 When I think about it, I was the lucky one back when watching The Twilight Zone with my cousin. Those were the days when we lived next door to each other out in the country. Separating us was a field with a pathway that we used to go back and forth. Lining one side of that field was a row of tall, stately poplar trees. To this day I can still hear the leaves in those trees rustle in the wind. When Halloween was approaching that rustling sounded more like witches screeching.
One night most every week for quite awhile my cousin would walk, or run, through the field to my house so that we could watch The Twilight Zone together. It was such a frightening show that watching it alone was never an option. Once she arrived, we'd flick the lights off and turn on CBS to get our 25 minutes of fear and suspense. I will now admit I got the better end of that scenario. I wasn't the one who had to run back home through that field with those poplar leaves moaning in the dark after watching The Twilight Zone. I just had to lock the door and go to bed. Most always I never went right to sleep. I'd replay the episode we'd just watched over and over again in my head.
Now thinking about those scary, cliffhanging, suspenseful weekly episodes, I think it was the voice of Rod Sterling that got me the most. Not that his voice was scary. It was his delivery. He'd grab my attention from the very first word and keep my attention to the very last word-all spoken in a monotone that needed no special effects. Just having Rod Sterling standing there and talking to me without a change in facial expression or inflection in his delivery or fancy backdrops was enough for me. His setting the stage to what was to come only enhanced the storyline that followed. From science fiction to fantasy; suspense to the unexpected, those weekly stories never disappointed. My cousin and I would talk about what we'd watched all weekend long until we were back again in the living room with the lights out, listening to Rod Sterling and watching his Twilight Zone.
Who can forget him saying to each and everyone of us: "The Twilight Zone is a place that exists at any moment of time, space or of mind-but always when you least expect it. When you find yourself in this realm of unlimited possibility, be careful what you say or do. The right decision may help you find your way back out, sometimes with greater happiness & wealth. The wrong decisions often lead to madness & death, or an eternity trapped in this dimension.
Tread warily past the sign post ahead that says you have entered-The Twilight Zone!"
And my cousin and I entered that zone with our eyes wide open and hearts beating and imaginations awake and ready to go.
Posted by Barbara Briggs Ward at 9:01 AM No comments:

Story in a Hedgerow 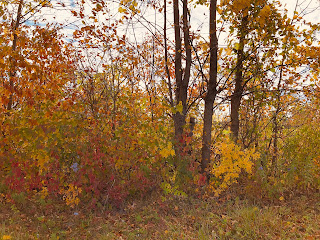 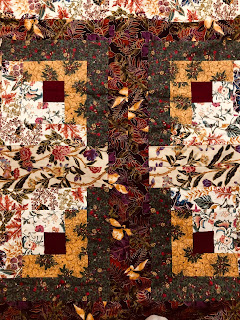 I took the above photo of a hedgerow a few weeks ago. Most any photo taken outdoors this time of the year stirs one’s senses but this one was telling me a story that I couldn’t figure out. That changed yesterday when I opened up an old cupboard where I keep little odds ‘n ends of things, most handmade by my children over the years —like a small ceramic ghost holding a pumpkin and a stuffed-with-newspapers-brown paper bag made to look like a pumpkin face and a ceramic statue of Charlie Brown and a painted, wooden tulip in a wooden vase as well as small candles and small Santas and reindeer and bunnies and trinkets from Dollar stores.

I’d gone to the cupboard over the weekend for a few Halloween ceramic pumpkins and while I was getting the pumpkins I noted a plastic bag way in the back. Sitting on the floor, I pulled the bag out; reached inside and grabbed hold of three very large and very beautiful quilt tops my mother had made. (Example of one shown above). I’ve written before of her sewing skills. She was meticulous. Her eye for color and design was keen. After sitting there for a bit, I put the quilt tops in the plastic bag and sat them way back in the old cupboard with all the other beloved treasures gathered together, safe and sound and out of the way.

So yesterday there I was yet again—back in the cupboard for a few more Halloween trinkets. The minute I saw the plastic bag with my mother’s quilt tops inside, it happened. I heard the story that hedgerow was telling me. I realized the quilt tops were telling me the same story. My mother had the ability to turn all those little mismatched pieces of color and design into keepsakes with every stitch she made. Mother Nature took the wind and the sun and the soil and the rain and turned a simple hedgerow of mismatched brambles and weeds and mini trees and grass sitting along a country road into a breathtaking pallet of design and color.

Both told a story of determination. Both revealed a beauty unique to themselves, even those brambles and weeds twisted together like pieces of fabric sewn together in quilt tops kept in a cupboard.

Posted by Barbara Briggs Ward at 9:01 AM 2 comments:

Growing up in the country provided the perfect spooky setting when Halloween was looming. Poplar trees with limbs bare transformed themselves into scrawny fingers ready to snatch any one of us kids as we ran by in a hurry. Leaves scurrying over the fields evolved into mice rushing toward us. We were certain our grandfather's old barn with its main door creaking in the howling wind sounded more like screeching witches cackling under the big orange moon. But Halloween wasn't only looming outside with bats swooping down and ghosts swirling about. Things were happening inside the house as well. Especially in the kitchen.
For as long as I can remember when my mother would go to the cupboard and take out her largest cooking pot and set it on top of the stove as the leaves fell and the wind blew and homes were decorated with pumpkins and cornstalks and my cousins and I were figuring out what we'd be for Halloween, I knew what my mother was going to make. She made it come every October. And she made it more than once. More than twice. It was our favorite soup and it was perfect for that time of the year. Somehow it became known as Witches' Brew.
Maybe it was that pot she was using. Surely if you were a kid you could have imagined it as a witch's pot. It wasn't black. It was silver but it was deep with pitch black handles and when she had her gooey, yellowish brew bubbling and she stood there stirring the brew with a long, wooden spoon, that cauldron full of a boiling, gooey yellowish g broth resembled a cauldron any witch would use. Even my mother. Even when her hair was done up in pin curls.
Standing in the kitchen, watching her stir her tasty concoction I imagined her dressed in black with a pointed hat and long, sharp fingernails despite her fingernails always manicured to perfection. When she added tiny little eyeballs, and cut-up parts and disgusting things that were little and round, that pot would get boiling hot and stem would cover the kitchen windows. Once it had roared to the point of being cooked, my mother would fill enough bowls and set them around the table along with warm cornbread just out of the oven. As we gathered around the table, we'd pick up our spoons and immerse them in our bowls of witches' brew.
And that's when the gooey, yellowish brew turned into chicken broth and those tiny little eyeballs became acini de pepes and those cut-up parts transformed into cut-up bits of celery, peppers and onions and those disgusting things that were little and round became delicious little meatballs.
Witches' Brew stirred the imagination at a most spooky, gruesome, scary and absolutely marvelously unforgettable fun time of the year when growing up out in the country. And witches' brew continues to be enjoyed, even by the next generation-tiny little eyeballs included.
Posted by Barbara Briggs Ward at 9:40 PM No comments: