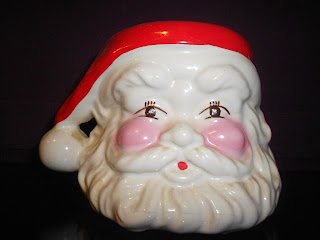 My family had a few Holiday traditions. The most delicious tradition was my grandmother's Christmas bread. The most fun tradition happened right after Thanksgiving dinner as dessert was being enjoyed. I don't know who started it or when. It was just something we did that became a tradition called Table Trees.

Preparing for Table Trees began Thanksgiving morning when sheets of paper were cut into strips. On each strip the name of a family member was written. While it differed who wrote the names on the strips, it most always was a younger member of the family doing it. After every family member's name was on a strip, the strips were folded a few times and placed inside the ceramic Thanksgiving Santa Claus which was then put some place secure until the dessert was being enjoyed. When I was little  it seemed as if the adults would never finish talking and eating so the ceramic Thanksgiving Santa Claus could be brought out and the fun could be underway.

Again it would be a younger member doing the honors. He or she would go around the table with the ceramic Thanksgiving Santa Claus, stopping just long enough so the person sitting there could reach into the ceramic Thanksgiving Santa Claus and pull out a strip. The name on the strip was the family member the person doing the choosing had to buy a small gift for to be opened after Christmas Dinner. The small gifts were known in the family as Table Tree Gifts. They'd be kept in a basket Christmas Day. As soon as Christmas dinner was done, the table tree gifts were passed around. It was always exciting. You knew all day long you had one more gift to open. Gifts were supposed to be kept at $5. or under but that never happened. Gifts bought were thought over and shopped for with extra care. After all, it would be the last gift opened on Christmas night. Sometimes certain names chosen weren't the most popular ones. Sometimes some switching among family members of strips with certain names was done on the side. One year my cousin got my older brother. Believe it or not I wanted his name. I wanted to buy him something I'd seen in Newberry's for his stamp collection as a Table Tree gift. My cousin switched and I totally surprised my brother!

When we were really young, one special aunt would take us all downtown shopping. We'd have lunch in a local eatery in the heart of that bustling area. At some point we'd stop at our uncle's shoe store to say Hi and take a break-but not for long. The quest for those Table Tree gifts was front and center. A few times it took more than one trip downtown to find the perfect gift.

I have that ceramic Thanksgiving Santa Claus sitting on a shelf in the kitchen. It isn't brought out on Thanksgiving Day anymore. Sometime traditions from a certain time belong kept in the heart as new ones begin. And that's just what has happened!
Posted by Barbara Briggs Ward at 9:04 AM No comments: 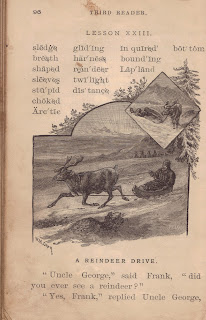 When playing school out in the country in our chicken coop schoolhouse void of chickens and filled with the chalkboard, books, and desks from an abandoned one-room schoolhouse, my cousin and I often shared the responsibility of teaching our 'class' of younger siblings/cousins. When they were not attending class their desks were occupied by invisible students who had pretend names and participated with enthusiasm. Sometimes too much enthusiasm. But all would quiet down when I read them a certain story set in Lapland from the Barne's New National Reader titled, "A Reindeer Drive." Actually I didn't read it. I made a story up and showed them the picture that went with the story-a reindeer running while pulling a small sleigh. For some reason I loved that illustration and decided to enhance it by letting my imagination take over. The pretend students loved it! They asked me to read it again and again and so I did.

I still have that book. The copyright is 1884.I love its simplicity. I love how the story is a lesson-Lesson XX111. There are new words shown before the story that will be introduced and after the story there is a Language Lesson with the instructions, "Let pupils give answers whether oral or written in complete statements." I did that with my students. I asked questions and they answered in complete statements. Most of them received a grade of 100 and a star hand-drawn in the upper right corner of their paper.
Looking back at that chicken coop turned clubhouse-schoolhouse-anything we wanted it to be I realize how lucky we were to have that old coop to play in and pretend and create and read and write in. Boredom was not a word we ever used. There was no time! Even in the winter when the snow would come through any cracks it could find we'd be out there bundled up and warm as toast for when you let imagination take over snow can work to one's advantage. Snow can become a storyline.
I am thankful I never actually read "A Reindeer Drive" to my class for it talks about how the people used the skins of the reindeer for hats, coats, boots, and beds.

My students would have been horrified! I know their teacher was!
Posted by Barbara Briggs Ward at 3:37 PM No comments:

Could My Father Have Been Santa Claus? 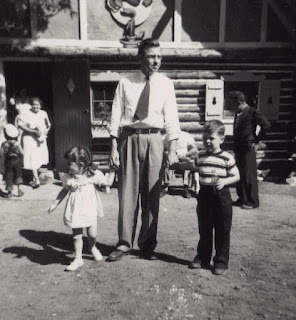 Because my father was a Funeral Director back when funeral directors were always on call we rarely went on vacations. When we did it was unusual if we went very far. The North Pole was only two hours away so we made that trip a few times. Every time was magical. Of course Santa Claus lived there. Although I knew that, one year on Christmas morning I was convinced my father was the real Santa.

The night before had been disappointing. Oh family members came. Piles of presents were under the tree. I hung my stocking and put the milk and cookies out with my brother. But it was raining outside. Any snow on the ground had been washed away. I'd never known a Christmas without snow in all my seven years. Besides the lack of snow, my father had to work. He made it home just as our mother was telling us it was time to get ready for bed. I was standing by the Christmas tree when he came in soaking wet. After pulling a package out from under his coat, he took the coat off and hung it over the bannister. Then he placed the package on a chair and came into the living room. After giving us hugs and asking about our Christmas Eve, my father grabbed that package and went to the kitchen. My mother had a plate full of food ready for him in the refrigerator. I was right behind him. I was keeping track of that package now lying on the counter.
I sat at the table while my father ate his Christmas Eve dinner. As soon as he finished, my mother was in the kitchen reminding  me it was time for bed. I tried stalling but it didn't work. Saying good night, I opened the door to the backstairs which led up to my bedroom. I stalled again, eyeing that package until my mother hustled me along. I was okay with that.
There were two registers in my bedroom floor. One looked directly down into the kitchen. Once I had my nightgown on and my teeth brushed I turned the light off-stretched out on the floor and peeked through the register. All I could see was white tissue paper and Christmas stickers on that counter.
I tiptoed down to the kitchen. My excuse was ready. I was thirsty. I didn't have to use it. I could hear my parents talking in the front room. The package was no where to be seen. I went back upstairs to bed.
While I thought I'd never get to sleep it was soon morning and I was rushing down the front stairs and into the living room with my brother. The stockings were bulging. But it was a package wrapped in white tissue paper kept together by Christmas stickers that caught my eye. It was sitting under the tree on top of some bigger presents. It was tradition for us to open one gift after our stocking gifts. Then we'd have breakfast and open the rest. I knew which gift I was going to open. I knew the present wrapped in white tissue paper was for me. I felt it. When it was time I took hold of that gift with my name in cursive on a tag. It was beautiful penmanship. I loved how the letters swirled as if caught in a breeze.I looked at my father. He was smiling.
Seconds later the tissue paper was off and I was holding on to a box I'd held on to in a small corner store just up the street. My mother and I had stopped there for a few things and while she paid for them, I found what I was now holding. I'd told my mother how much I hoped Santa would bring me the paint-by-number kit with primary colored felt tip markers included. Sitting there in my nightgown I looked back at my father. He was still smiling. Then he pointed to the window. It was snowing.

The paint-by-number kit with primary colored  felt-tip markers ended up my favorite Christmas gift that year. I don't know how my father ever knew I wanted it as much as I did. I convinced myself he was Santa Claus.
Posted by Barbara Briggs Ward at 11:29 PM No comments: