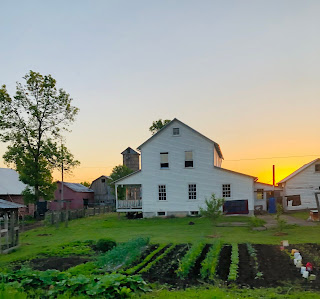 The more I looked at this photo of an Amish farmhouse and barns and outhouses and gardens that I'd taken on a back country road, the more it resembled a beautiful work of embroidery, what with its textures and colors and lines and thicknesses here and there.
I thought of my grandmother, sitting in her rocking chair, using her hands to create beautiful works of embroidery with a needle and thread.
My grandmother taught me a few stitches. When I looked at the photo I thought some of the plants in the garden resembled the blanket stitch or the herringbone stitch and the thickness of the green grass resembled a padded stitch. Little buds on plants made me think of her French knots. But I never embroidered a thing. I learned a few stitches and that was it. Not that I didn't want to learn more but I was in to sewing at the time.
Now I wish I'd sat with her longer to learn more stitches and techniques. Any time with my grandmother was priceless-even when picking my fingers with a needle trying to learn embroidery stitches.

Posted by Barbara Briggs Ward at 8:09 AM No comments:

My Father in Suspenders in the Farmhouse Kitchen 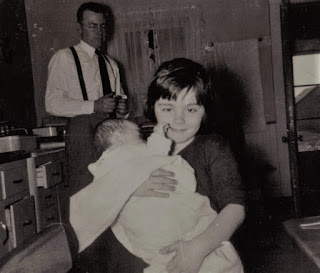 Did you ever look at an old photo and wish you could remember the moment? That's how I felt when looking at this photo of  me holding my baby sister. Behind us is our father. We are in the kitchen of our grandparents' farmhouse. To my left, with only a corner showing, is the kitchen table.
My grandmother's woodstove was beyond the kitchen table. A built-in cupboard stood in the corner.  The door in the photo led outside to a small, cement stoop and beyond to the root cellar, pump house, barn, grain shed, chicken coop, fields and the creek.

I'm guessing we were gathered for a family event. I'm guessing it might have been an Easter Sunday since my sister was born in January. But I'm only guessing. It looks as if there's still snow on the ground. That doesn't matter. It still could have been Easter. Seeing my father wearing a tie isn't surprising to me. He most always wore a tie, even when he went to the post office or grocery store.  My father most always wearing a tie might have been a generational thing. Or his wearing a tie might have been because of his profession. My father was a funeral director. He treated those who came to him in times of sorrow with the upmost respect, including the manner in which he presented himself. He was dedicated to those families. To this day, I am told stories of my father's kindness.

I love the look of my father dressed in the suspenders. So handsome he was in that crisp, white shirt. Seeing him standing tall with his wire-rimmed glasses and that crisp, white shirt and the tie and those suspenders makes me think of  "The Godfather." I can imagine a 1941 Packard or a Lincoln Continental of the same year wheeling down my grandparents' cinder driveway lined with poplar trees, taking the curve and slamming on brakes with cinders flying just outside that door and a few seconds later, some Michael Corleone type guys rushing inside the kitchen. Of course those gangsters might have had to park their gangster vehicles near my grandfather's old Ford tractor.


Old photos are stories of a time and a place and a moment. Once the moment is captured, it will live on forever, along with the legend of Michael Corleone and my grandmother's kitchen table now sitting in my home, still gathering stories with photos being taken-not by a Kodak Brownie camera-but by cell phones; making the photos available instantly at one's finger tips.

I still prefer a box of old glossy photos with dates scribbled on the back and sometimes names written in cursive. When you open the box, it feels like Christmas. And maybe in that box of photos you'll discover a photo you'll treasure as much as I do the photo of my father in suspenders in the Farmhouse Kitchen.

Posted by Barbara Briggs Ward at 4:10 PM No comments: