The Crooner On The Crescent 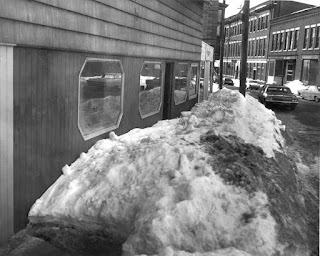 (The above photo showing a section of The Crescent in downtown Ogdensburg courtesy of Ogdensburg native Ted Como-then a staff reporter at the Ogdensburg Journal-now living in Tennessee.)


There used to be a section in the downtown where I grew up known as The Crescent as it followed the bend of the river running along just below. At one end of The Crescent it flowed underneath a bridge merging with another river.

Back then the bridge provided access to the downtown. Going one way brought people into the shopping district. The other way brought them to additional shopping options-just not as many. The Crescent led walkers and drivers and the curious to the downtown in a back sort of way. The Crescent wasn't the heart of the downtown. It ran parallel to that thriving downtown full of tall and mighty brick buildings housing shoe stores, department stores, clothing stores, furniture stores, jewelry stores, hardware stores, five and dimes with soda fountains, a photo shop where you could bring your rolls of film to be developed and the top tunes of the day were available on 45s and record albums were displayed in bins one right after another. There was a milliner's shop with a winding stairway leading to its door and pharmacies and a fresh fruit store-banks and diners and restaurants and a newspaper; movie theatres, apartments, offices, grand hotels, an army-navy store, a pool hall, pubs, a sweet little bookstore, an amazing soda fountain with those round tables and wrought-iron chairs and creamy sodas and real milkshakes served with containers holding more of the thick, delicious drink enabling you to refill your glass more than once and coke served on ice in what has become vintage coke glasses. In front of the soda fountain there was a smoke shop complete with cigarettes and fine cigars as well as newspapers from all around the country and magazines. There was something about the smell of all that newsprint mingling with pipe tobacco in that area with its tile floor and overhead fans. One might expect to find Humphrey Bogart standing at the glass counter, about to buy a pack of Camels.

While The Crescent wasn't the main thoroughfare, it did play an intricate role in the make-up and spirit of the downtown. Following the curve in the street were all sorts of little shops and businesses. Besides a dry cleaner and a cobbler-a fine family-owned restaurant offering Italian cuisine, a Montgomery Wards and other known stops, a popular eatery housed in an old dining car was a buzz of activity 24-hours a day. 'The Crescent Diner' offered a full menu and if you went for dinner, you could very well have been entertained by the singing waiter-the 'Crooner on the Crescent'-in other words, my father. Oh he wasn't my father back then. I wasn't even around. He wasn't even married. He was young and fancy free, waiting on tables and driving young women crazy with his crooning. He really did. Over the years I've had women, who knew my father back then, tell me how'd they go to The Crescent Diner just to hear him sing. His most requested song was 'Pennies from Heaven." I guess the girls really swooned when he moved about table to table singing that particular song. You have to remember this was the Frank Sinatra era-although it wasn't Frank making them swoon. It was a singing waiter nicknamed 'Nookie' by his adoring fans.

I'm intrigued by the fact my father was a crooner-a singing waiter in a diner sitting above a river that still flows into another, alongside a downtown now demolished. I wonder what he was like back then. I wonder when he decided to become a funeral director. I wonder if he ever thought about pursuing a singing career. I wonder what would have happened then.  He probably wouldn't have met my mother and I wouldn't be here. I think Nookie made the right decision!

Posted by Barbara Briggs Ward at 11:35 PM No comments: