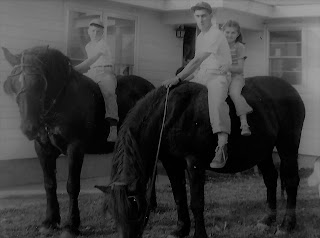 Did you ever look at a photo and wish you could remember that moment; remember what lead up to it and what everyone was saying and who took the photo and what happened after the photo had been taken and life continued on?
I had all those questions and more after receiving the attached photo from a cousin. That’s me sitting on a horse behind my Uncle Paddy-my cousin’s father. My older brother is sitting on the other horse. I have no recollection of that day. But I do know if my Uncle Paddy was involved, it would have been a fun day. Most in the community knew him as owner of a shoe store. I knew him as an uncle who was a kid at heart.
Uncle Paddy was the one who built us kids rafts out of telephone poles so we could go off on adventures on a creek that ran along behind our homes. Uncle Paddy was the one who helped my cousin and I set up a tent behind his house so we could camp out on occasion over summer vacations. Of course he was also the one who loved to scare us later on and then show up early in the morning for fried eggs and toast cooked over a fire consisting of twigs and creek grass producing lots of smoke that made our eyes water.
Uncle Paddy was the one who spent hours planning what became an annual Easter Treasure Hunt when we all lived out in the country in those four houses in a row. Before we were awake on Easter morning, he’d go about that huge plot of property and hide clues for us to find. The pot of gold was individual brown bags of candy, lots of candy, for each one of us. We worked for that candy. He hid the clues in hard to find places. Some of the clues were near impossible to figure out. A few times over the years we’d ask him for help when we were stumped, but he never said a word. He’d just laugh and tell us to keep looking. He loved watching us running from the creek to the barn to the grain shed to cars and rock walls and everywhere else in between. After we finally found the treasure, we’d hurry inside to discuss the hunt with the treasure hunt creator himself.
Later in life, it was my Uncle Paddy I’d go with to the movies. He’d always buy us popcorn in that downtown theater of long ago. I think Dr. Zhivago was one of our favorites.
I still have so many questions about that photo. I’m thinking my Aunt Claire probably took it with her Brownie camera since we were on our horses right in front of her home and she loved taking photos. The horses probably came from a nearby farm. Of course I’m just guessing.
The one thing I know for sure is my brother and I were having lots of fun and lots of laughs riding horses bareback out in the country with that kid at heart.

Posted by Barbara Briggs Ward at 9:12 AM 2 comments: 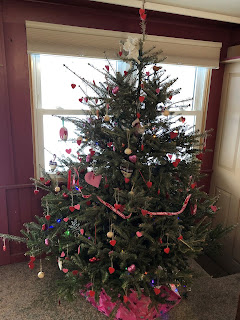 This past December when going to the woods for a Christmas tree, I came back home with two trees. One was for the living room. The other was for the room where Brian and I spend most of our time. We call it the Groove room. It used to be a back porch. Now it’s where it all happens; everything from singing and dancing to TV viewing and CD listening and writing and watching the leaves turn and the snow fall and the garden grow and the deer pass by. It overlooks the back yard and the fields; a rock wall where rabbits live and the old barn with a light in the upstairs window.


I’d thought about putting a small Christmas tree in the Groove room before but I never followed through. Something was telling me to do it this past Christmas. So I did. Once Christmas was over, it didn’t bother me to take down the tree in the front room but that little tree on the old back porch was a different story. Brian and I weren’t ready to say goodbye to what had become our favorite little tree. So we decided to keep it up through January. But by the end of that month, we still weren’t ready to say goodbye to that precious little tree.


Because I love Valentine’s Day for all of its color and warmth in the midst of winter whites and greys and chilly temperatures, I suggested to Brian that we turn the little Christmas tree into the little Valentine Tree. He liked the idea, probably because it meant a few more weeks of having the little tree within view.

But the memories of that little Christmas/Valentine tree will remain in our hearts forever. 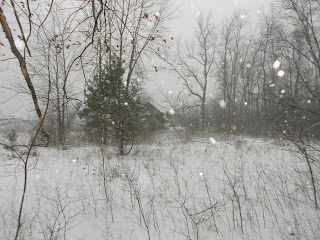 With the snow and the wind and below zero temperatures, I sometimes fix something simple for myself when suppertime comes around. This doesn’t happen every night but when it does happen; whatever I fix not only warms me up but fills me with an even deeper appreciation of winter. I’d never think of having hot cereal for supper in the summertime. But I do during the winter. And I enjoy every spoonful as much as I would enjoy a full-course meal. After the hot dogs and potato salads and the boiled dinners and turkeys, winter offers a time of slowing down and occasionally treating yourself to simple, warm and relaxing suppers.


Besides a bowl of hot cereal, which could be Oatmeal, Corn Meal, or Wheatena with an added treat of dipping a piece of toast into any one of those cereals, my simple winter supper might be buttermilk pancakes with either blueberries or bananas on top. When the kids were little I had a Hello Kitty-shaped pancake skillet. Those pancake suppers were quite popular.


Another simple winter supper—which was sometimes enjoyed for breakfast as well— was a favorite when growing up in the country where I was blessed with having a grandmother living next door. Those of us who gathered around my grandmother’s kitchen table in wait of her serving her quite popular rice croquettes could never get enough of such a simple, yet such a delicious meal. Now looking at her recipe, it’s hard to believe the joy and satisfaction we experienced from rice mixed with 2 beaten eggs, then shaped into croquettes and rolled in flour or bread crumbs and cooked in deep fat until browned. Maybe it was the hot tomato sauce covering the croquettes that we loved. Or, maybe it was because we were gathered around our grandmother’s kitchen table and we would have enjoyed whatever she was cooking.


One of my aunts loved having an egg on toast or chipped beef on toast or creamed peas on toast. They were all simple winter suppers. This aunt also loved going out to a diner for breakfast. She’d come home with more than a few packets of sugar or little creamers in her purse.


Some winter suppers are a little fancier yet remain on the simple end of preparation. Tuna casseroles, creamed tuna on toast (can you tell I love tuna fish), or corn bread served with regular goulash or my grandmother’s French goulash all hit the spot when the snow is swirling and the wind is howling. Homemade soups and shepherd’s pie get a little fancier but worth the effort.

Winter suppers, simple or not quite so simple, are all about being home; being content as the wind howls and the snow falls and you are safe and warm with less dishes to do and more time
Posted by Barbara Briggs Ward at 5:47 AM No comments: