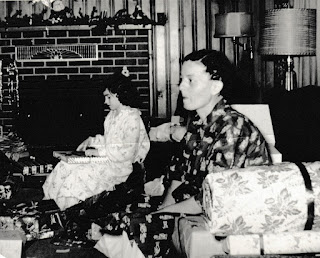 I knew this photo existed. I just couldn't put my hands on it until one day last week-one day during the month of July. Finding the photo in a pile of old photos in a trunk kept in the garage has led me to believe there really can be Christmas in July! Before I thought it was just hype. A great phrase to use as a marketing tool when sales slack off in the heat of summer. But now I feel differently. Finding the photo of me in my nightgown opening a gift on a Christmas morning and my mother sitting on the couch nearby with her hair done up in bobby pins was like opening a gift on Christmas morning with the snow coming down and Bing Crosby and Dean Martin and Andy Williams taking turns with the entertainment.

While today-at this very moment as I write this post-there is no snow outside or pile of unopened presents in the living room stacked beneath a tinsel-laden Christmas tree decorated with ornaments bought at Newberry's and Woolworths and while there is no Santa on a mantel, and despite the fact that particular house was sold and my mother has passed away and I have two grandchildren, really-nothing has changed. The spirit and anticipation felt that Christmas morning of long ago still exists even in the month of July for it exists in my heart. It has never gone away.

Since finding the photo I've looked at it several times and each time I'm brought back to that morning. I can smell the coffee perking in the kitchen and my grandmother's Christmas bread sliced and sitting on the table covered in a red, hand-embroidered by my mother tablecloth. I can see my father sitting in his chair already dressed for the day and most likely that included sporting a tie. I can hear my younger sister and brother tearing through their stockings and then going for their presents while my older brother sits like me quietly opening gifts. After all, we were older. We couldn't rip off the paper. We were too cool. I dare say while on the outside he remained cool and calm; inside his stomach was doing flips and somersaults. I know that's how I remember feeling as I sat near my mother quietly opening presents on a Christmas morning of long ago.


Posted by Barbara Briggs Ward at 9:49 AM No comments: 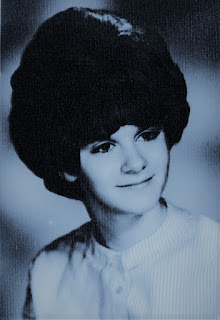 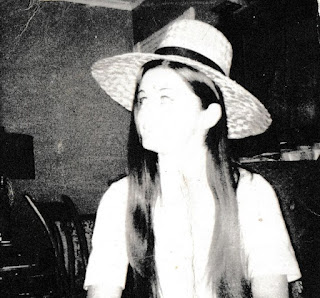 At first I thought I'd be getting pretty brave when posting my graduation picture along with my Cher era photo. Now that I'm doing it, I realize it doesn't matter. It's worth a laugh or two. Hair is just that-hair.We all have photos of our hairstyles and cringe at how we wore our hair at certain times. But each particular time tells about a chapter in our life. It might be a good or bad or sad chapter but all those chapters add to what is our own, one-of-a-kind story and our hair is a part of that story.

When I was born my parents told me I had so much hair that the nurses kept it gathered on top of my head in a 'whisp.' In fact the nurses called me Whisteria. As I grew into a little girl, my mother often French braided my hair. When I was a pre-teen she took me to a barber shop and had my hair chopped off into a sort of Buster Brown hairstyle. That's the way it stayed until I became a teen. That's when I took over. Most every night in my freshman year I'd go into the kitchen-take out an egg-crack it, strain out the yolk, and then mix the white of the egg with some water. Then I'd go into my bedroom, shut the door and do my hair up on big rollers. I'd comb the egg white mixture into every strand before wrapping that strand around a roller and pinning that roller to my head with hard, plastic picks. Then I'd wrap a net around the rollers and sleep on them all the while telling my mother that Yes-I was doing my homework. In the morning, I'd carefully take each roller out. I really didn't have to be careful since the hair was like cement. It wasn't going anywhere which is what I wanted. I'd tease it all into a beehive as tall as I could get it-then spray that hive and off I'd go to school thinking I was just about the coolest chic ever. I wore that style for the longest time. It changed when Sonny and Cher made their debut. No more egg white for me. I wanted my hair as long and straight and free as it could be. That stage lasted for a quite awhile. A part of that stage included the discovery of long, pretend braids. A friend of mine and I would pull our hair high up to the top of our heads into one long ponytail. Then we'd wrap the fake braid around it-tuck the ends of real hair underneath it, secure it with bobby pins and think we were pretty cool in our hot, fake braids. Once I married and had children, hair time was about no time. When they were young I cut my hair all off and permed it into tight curls. That way it was no bother. They couldn't pull on it. If I didn't get to wash it, the curls looked just fine or so I thought they did. I didn't have much spare time to check..

Funny how hair tells a story. If my hair was writing a book it would include the times my sister-in-law and I used a boxed treatment for streaking our hair. We're lucky our hair didn't fall out since keeping track of the time was something we were not too good at. There'd also be chapters on long hair and short hair; streaked hair and curly hair and probably more than one chapter on the use of egg whites for gluing one's hair into place.

I still have this little inkling gnawing at me to go red. Not a bright red. Just a nice auburn kind of  red. I know when the mood hits-that will happen! And then that will be another chapter.

Posted by Barbara Briggs Ward at 10:09 AM No comments: