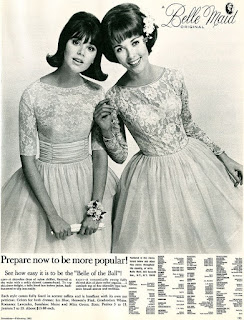 I hardly ever wore crinolines under my skirts way back when wearing crinolines underneath skirts was the fad. Not participating in a fad was unusual for me. After all, I ran to a department store located in the downtown of where I lived  the moment Sonny and Cher's "I Got You Babe" grabbed my attention. I had to have bellbottoms and short-sleeved ribbed sweaters. I had to grow my hair down to my waist. But crinolines were a different story. I didn't like all of that netting. I didn't like my skirts pushed way out in front of me even when most of my friends wore crinolines all the time.
However, there are most always exceptions to most anything-even when it comes to wearing crinolines if crinolines aren't your thing. For me, that exception  came when my grandmother made me a velvet green dress to wear to a Christmas party. It was going to be held in a grand old hotel in that downtown where I lived. My date was a Freshman at a nearby college. He was so cute. We were going with a friend of his and that friend's date.
My grandmother was an expert seamstress. I had no problem wearing a homemade dress. I knew it would look as if I'd bought it in some fancy store. My mother, also an expert seamstress, owned a fabric store. It was part of our home and my grandmother lived next door. So on a Saturday morning my grandmother came over and we talked about 'the dress.' It took a few hours. The dress had to be perfect. Since it was a Christmas dance, the three of us agreed velvet would be perfect-emerald green velvet. Then we browsed through some pattern books to get some ideas. The dress ended up being a combination of features taken from a few patterns. My grandmother never actually had a specific pattern to follow. She measured me while my mother measured out the yards needed. Besides a zipper, that's all my grandmother had to make the dress. No pattern. Just a bag with the velvet and a zipper inside.
I went for a few fittings. That was fun. I loved watching my grandmother tighten a dart or tuck in a seam with her measuring tape around her neck and straight pins attached to her house dress for quick use. When I went for the final fitting three days before the gala event, I was shocked to discover my grandmother had added crinoline to the dress. Not too much but still, it made the dress puff out a bit. I didn't say anything. I didn't feel like trying it on but I did. She'd worked so hard on the dress. My grandmother put it over my head and I could feel the netting go down my sides. After she zipped up the back, she turned me around in front of a long mirror and asked me what I thought. I was afraid to look. When I did, I fell in love with the velvet green dress. The crinoline added something special. It dressed it up. It would be fun to dance in it. I loved to dance. I was excited.
Despite the velvet green dress, the dance was a disaster. After we'd dance to a fast song and my crinolines went flying, my cute date smelling of English Leather told me I wouldn't see him again because he had a girlfriend back home. Not even that dress could stop the tears.
I never wore crinolines again. I was quite happy when miniskirts and go-go boots became the fad.
Posted by Barbara Briggs Ward at 9:37 PM