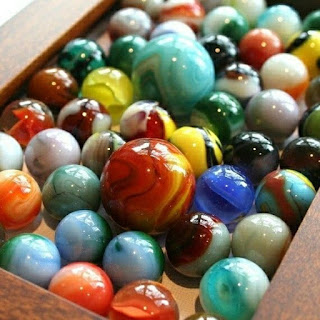 Right about this time of the year when growing up out in the country, I’d be looking for my bag of marbles. It wasn’t a fancy bag. It was a paper bag and there weren’t that many marbles in it. My older brother was the one with the marbles. He kept them in a plush-like bag with ties you’d pull shut so the marbles wouldn’t fall out. Sometimes when he wasn’t home I’d sneak into his room, pull open a certain dresser drawer and grab hold of that plush-like bag. Then I’d sit on his bed. Open the bag and spread the marbles out in front of me.
One time a marble rolled off his bed and disappeared just as I heard him come through the front door. I panicked. I scooped up the marbles and dumped them in the fancy bag. Then I got down on my knees and searched for the one that got away. I couldn’t find it! I was running out of time so I put the plush-like bag back in the drawer and hurried to my room and shut the door. I waited for him to start yelling at me. I was convinced he’d find it. But that never happened. He never went in his room. A few minutes later I heard him go back out the front door. Watching him walk up the road, I hurried into his room and eventually found that marble and put it back where it belonged.

I think most of my marbles came from Woolworths or Newberry’s. I didn’t have any fancy ones like steelies, but my brother did. And like his marbles, he had steelies in all sizes. My marbles were just your regular sort of marbles. Some, like the solid white ones and solid yellow ones, looked like gumballs. I had a few favorites chosen because of their swirling colors.
My cousins and I would get our marbles outside as soon as the snow started melting. We’d play with them in what grass there was despite it being frozen. Our marbles would roll in the snow; in mud puddles; down the cinder driveway; into the little stream beside our grandparents’ farmhouse waking up and getting a little bit bigger most every day. Our hands would be freezing.  Our feet would be soaking wet but we didn’t care. We were finally outside playing with our marbles after waiting all winter long.

I don’t know what ever happened to that paper bag holding those glorious little balls of fun. I guess you could say ‘I lost my marbles!’

Posted by Barbara Briggs Ward at 10:57 AM