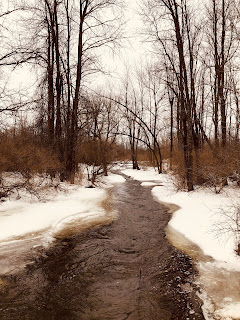 After passing by the creek shown in the attached photo, I found myself turning back around to take a closer look. There was something about that creek; bringing me back to another creek waking up in springtime.
When growing up in the country, spring surrounded us with the smell of the earth thawing and the honking of geese announcing their return. The creek that ran behind those four homes full of relatives would overflow its banks like clockwork when the temperature began to rise. One day it'd be frozen in place. The next day it'd be moving along swiftly, spreading out into the surrounding fields like a wildfire out of control. It was exciting to see that creek expand. Sometimes while having supper, we'd watch muskrats sitting on chunks of ice flowing by as if on a carnival ride. We weren't allowed to play near that creek when the water was full of cakes of ice and moving along at full speed but that didn't matter. There was a little stream that ran alongside our grandparents' farmhouse. It was the perfect-sized little stream even when it overflowed its little banks. I'd play outside with my cousins in and around that little stream until dragged inside, soaking wet and anxious to get back outside to continue our playing.
The little stream came flowing through a tunnel built under the road, bringing waters from other fields to our little stream; then to the flat rocks and eventually to the big creek with cakes of ice.
If the weather changed and the temperature dipped, that little stream would turn to ice. But that never stopped the play. We'd find shovels or picks and open our highway of water back up so we could find more twigs and use them to race each other's twigs down that little stream to the finish which was the flat rocks.
Racing those twigs was so much fun. Sometimes a twig would get lost underneath the edge of ice still in place. Sometimes a twig would blend into a glob of twigs or dirty, leftover leaves. If that happened whoever owned the twig would have to take their mittens off and recover their racing twig, I don't ever remember being cold when playing in that stream even when my mittens were soaking wet and my nose was dripping and my boots were full of mucky water mixed with leaves and stones. None of that matters when you're a kid and spring turns your winter playground into something brand new and exciting, offering brand new things to play and explore until spring turns to summer and that little stream dries up and disappears under the sunshine and heat of the new season.
But with that flat rock in place, something magical happened in the heat of the summer. That's when a natural bubble would pop up and out of the flat rock. It was so cold and so delicious. It was worth clearing away the green moss, lying down on the flat rock and getting good and wet just to drink from that natural bubble-proving once again how magical it was to play about that little stream-that wonderful little stream offering hours of never-ending fun at no charge and no batteries required.
All that was required was Imagination.

Posted by Barbara Briggs Ward at 10:59 AM