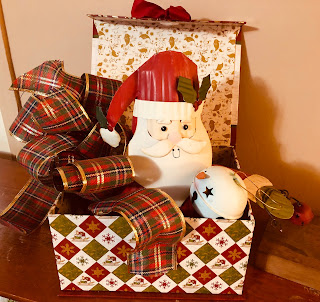 There was something about the old tin Santa Claus sitting inside an old cardboard box on a wooden shelf in an open outdoor shed that caught my eye. The area was full of one-of-a-kind Christmas wreaths and precious one-of-a-kind holiday decorations like the old tin Santa Claus obviously put together with love and imagination by the woman who owns the acres of Christmas trees where we’ve been going for quite a few years in search of and then the sawing down of our Christmas trees.
I arrived early so while I waited for two certain little ones to get there with their parents I spent some time looking for a tree and wandering about that shed. I noticed the old tin Santa Claus right away despite the fact it was sitting way in the back. Once I was standing in front of him, I knew I’d be taking him home. I didn’t need him. I had no use for him. I realized he’d only be sitting inside his old cardboard box on a shelf or on a table in my home. And that was fine with me. He wasn't fancy or computerized or collectible or signed and numbered by the artist. The old tin Santa was, simply put, simple.
Standing there, I realized that was it. He was simple; created by the putting together of a collection of odds ‘n ends of things-of nothings some would say-and then perched on a wooden shelf in an open outdoor shed that felt more like the North Pole than a shed off on a country road. If you stayed still and took in the moment and remembered that feeling of believing when you were a child; if you allowed your imagination to soar, you’d be convinced those famous reindeer were near and sugar cookies were baking and elves were painting rocking horses and sewing outfits for dolls and knitting mittens and stuffing teddy bears.
I was convinced. I bought that old tin Santa Claus sitting inside an old cardboard box. And now that he has become part of the family, I've figured out what it was, other than his simplicity, that caught my attention.
You see, that old tin Santa Claus reminded me of an old Santa Claus my grandmother would put out on display this time of year. That Santa was simple. He didn't talk or do any tricks. He was just Santa Claus. Santa Claus doesn't need to do tricks. If you believe in him, you just simply Believe.
Posted by Barbara Briggs Ward at 8:13 AM