For The Love of Paint-By-Number Kits 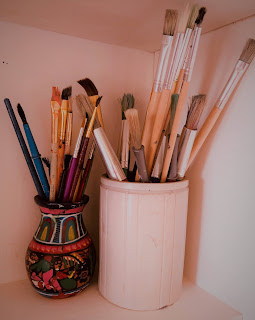 I always felt like a famous artist when working on a Paint-By-Number Painting. I loved them. They came in a kit inside a decorated cardboard box. The kit contained everything one would need to complete the painting. Some kits included one large paint-by-number painting. Others included three paint-by-number paintings, smaller in size than the kit with the single painting. I can still remember my most favorite of all the ones I painted. It was a horse standing in front of a barn-a rather big horse. I spent hours on that painting, sitting at my desk in a bedroom I shared with my younger sister with a huge assortment of brushes, a glass of water and lots of tissues sitting next to me. I always made a mess when creating. That's just what artists do.

But of all those kits I received, the one I remember the most came from my father. I don't remember the actual painting itself but I do remember the anticipation it created. It was a Christmas Eve. My father was a funeral director and that meant he even had to work on Christmas Eve if there'd been a death. This particular Christmas Eve he had to work. On top of that it was raining. Relatives had come for dinner and were gone when he came walking inside the house soaking wet. My older brother and I were dressed for bed. Milk and cookies were all set up. We waited for our father to get his coat off before we hugged him and said goodnight. When he took his coat off I noticed him grabbing hold of something hidden by his coat and putting it on a chair in the dining room. It was a package! It was Christmas Eve! I just knew it was for me.

While I thought I'd never get to sleep it was soon morning and I was rushing down the front stairs and into the living room with my brother. The stockings were bulging. But it was a package wrapped in white tissue paper kept together by Christmas stickers that caught my eye. It was sitting under the tree on top of some bigger presents. It was tradition for us to open one gift after our stocking gifts. Then we'd have breakfast and open the rest. I knew which gift I was going to open. I knew the present wrapped in white tissue paper was for me. I felt it. When it was time, I took hold of that gift with my name written in cursive on a tag. It was beautiful penmanship. I loved how the letters swirled as if caught in a breeze. I looked at my father. He was smiling. It was his penmanship.

Seconds later the tissue paper was off and I was holding on to a box I'd held in a small corner store just up the street. A few days earlier, my mother and I had stopped there for a few things and while she paid for them, I found what I was now holding. I'd told my mother how much I hoped Santa would bring me the paint-by-number kit with primary colored felt tip markers included. Sitting there in my nightgown I looked back at my father. He was still smiling. Then he pointed to the window. It was snowing.The paint-by-number kit with primary colored  felt-tip markers ended up my favorite Christmas gift that year. I don't know how my father ever knew I wanted it as much as I did. I convinced myself he was Santa Claus.