A Most Unexpected Christmas Gift 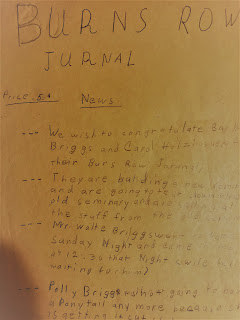 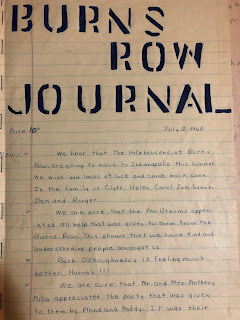 In early November, I received a Christmas gift from a cousin I spent most every day with when growing up out in the country in that row of four houses filled with relatives. The gift came in a large manila envelope. Inside there was a Christmas card with copies of what started out as an idea we had and turned into a ‘family newspaper’.
I don’t know how old we were when we had the idea of ‘publishing’ a family newspaper but it didn’t take long before the idea turned into a reality. We called our newspaper the ‘Burns Row Journal’—named after our grandparents. We decided it would be a weekly. Starting out, we’d charge five cents a copy. Every Saturday night, the ‘presses’ were rolling, meaning we sat down and hand-printed four copies of our newspaper. Delivery was always Sunday morning to each of the four houses. While the first copies of ‘The Journal’ were small, content quickly grew to offer our readers more than just news, which was a combination of family news and national news if something caught our attention from the fifteen minute nightly national news broadcasts on TV. Added content included Sports, Classified ads, Display ads, Want ads, Local Events, Birthdays, Jokes, and ‘Newsy Notes from the Editor’s Desk.’
The manner in which we held the pages of our paper together changed as we became more professional, starting with scotch tape; then staples and eventually, sewing them with a sewing machine. From the examples I am including, you can see, as we grew older, how our front page changed for the better. There were fewer misspellings. We used a typewriter. The name of the paper was printed in a more ‘professional font.’ And the price went up!
I have no idea when our first edition hit those houses. Looking at the example, we were quite young. And, I don’t know how old we were when our presses stopped rolling.
I hadn’t seen a copy of the Burns Row Journal since delivering the final copies. So when I opened the manila envelope, I was overjoyed to find three copies. I’d shed a few tears and then laugh as I sat and read each edition. And when I opened my cousin’s card and read her note, I felt the rush I’d feel when working on our paper. We worked very hard to make our paper interesting for our readers. Our ads were quite creative. The copy, at times, was lively. My cousin’s message was heartfelt, writing that our Burns Row Journals were “works of art!”
The Burns Row Journal never won any journalism awards. Instead, it won the hearts of their dedicated readers in those four houses in a row out in the country.

Posted by Barbara Briggs Ward at 8:25 AM