Dishes That Tell A Story of Christmas 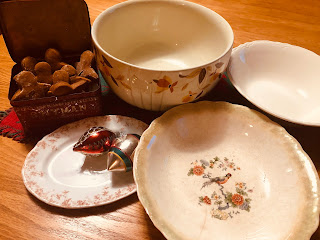 When you’re young and gathered with family around the table, you don’t think about the dishes used to serve the meal. Some of those dishes are pulled out from kitchen cupboards. They’re the everyday dishes. Others are taken off shelves in a china cabinet. Those are the ones used only for special occasions. They need to be washed before they’re put to use. Some are quite old. Some have been serving meals for generations. Some have offered more than food; serving comfort in times of sorrow; joy in times of celebration.
As a child, our attention is elsewhere especially on Christmas. Santa Claus and reindeer and overflowing stockings and presents under the tree take precedence over dishes. They’re just dishes. But that changes as we grow older. Those dishes start to mean something. Those dishes and bowls and platters somehow turned into traditions as we were growing up. They’ve become old friends. They’ve earned a chapter or two in our family story like the yellow bowl that held the coleslaw made by an aunt who never married and the platter that sat in the middle of the table holding the turkey sliced by an uncle who always wore a bow tie and fell asleep after dinner. China serving bowls, some with a few nicks and scratches, held potatoes and squash, turnip, stuffing, cranberries and dumplings. Crystal dishes held pickles made from garden cucumbers by a grandmother who also shared her scrumptious pickled pears in another serving dish and slices of her infamous Christmas bread in yet another.
Pies in familiar pie plates with homemade crusts were made by the family pie expert. Crusts were crimped around the edges in lightning speed as if the baker was playing a piano. Along with the pies came coffee served in cups with saucers matching the plates sitting in place around the table all decked out for the occasion.
Besides the dishes earning a chapter or two in a family story, supporting players such as tablecloths and candlesticks and aprons worn by those preparing the feast and original artwork taped on the refrigerator-some showing colorful scribbles and some showing Santa in his sleigh or Frosty with his broom-complete the family story for another year.
Every year is different as a family grows and changes. But if we’re lucky, some of the dishes remain the same. That part of the story continues on. That’s what traditions do.

Posted by Barbara Briggs Ward at 7:50 AM