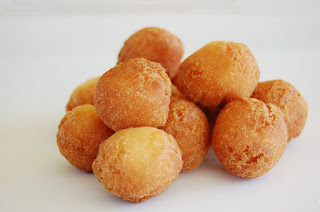 My grandmother would often make jam tarts out of leftover pie dough. I loved her tarts just as much as her pies. They were usually strawberry jam tarts. When she took them out of the oven, the tarts were a golden brown and some of the sizzling jam would be oozing out of the folded dough. The aroma of those piping hot jam tarts drifting through her farmhouse added to the anticipation when biting into one-or two of the tarts. That aroma remains with me today as does the aroma of plain brown donuts and donut holes made and enjoyed when my children were quite young.

Using my grandmother's recipe for the plain donuts, I'd have the dough ready to go. The number of kids making donuts varied. Sometimes it was just my children. Other times it seemed like the entire neighborhood. Either way it was pretty well-organized. Each child had a job to do. There were those who rolled out the dough. There were those who cut out the donuts with the one and only donut-maker-cutter. It usually turned out that all of the kids cut out some donuts if they wanted to. It became quite busy-rolling out the dough, then cutting the donuts out and gathering up the middle of each cut-out donut to roll into a ball for a donut hole; then gathering up any leftover dough and starting the process all over again.

Once most of the dough had been used, the focus turned to the Fry Daddy sitting back on the counter, full of hot grease ready to turn the spongy dough into donuts and donut holes. It was a very safe and carefully executed process. I was always right there as the older children slowly lowered the dough into the grease using a large cooking spoon with openings for the grease to escape as the donuts were lifted up and placed on layers of paper towels. When they cooled down a bit, some of the donuts and donut holes were put into a brown bag full of confectioners sugar. Then whoever was the brown-bag-full-of-confectioners-sugar-shaker would go to work, shaking that bag, resulting in whatever was in that bag came out covered with the sugar. Not all the donuts and donut holes went in the bag. Many were spared the process. They were kept to be enjoyed as plain brown donuts and donut holes. And enjoyed they were.

Each child received a small bag of donuts and donut holes to take home with them. I dare say when they did get home, their bags were empty. Just the smell of those delicious donuts was enough to devour each and every one of them-just like the aroma of my grandmother's jam tarts piping hot from her oven with sizzling jam oozing out of the folded dough.


Posted by Barbara Briggs Ward at 8:47 AM