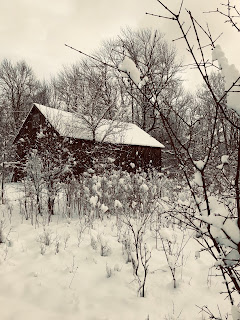 The other day as big, fluffy, beautiful January snowflakes fell, Brian started listening to a Gordon Lightfoot CD I'd bought him for Christmas. I bought it for one particular song that he's always liked. After he listened it, I suggested he listen to the other songs, telling him the other Gordon Lightfoot songs were just as good. So he did.
I was in the kitchen when a certain song started playing. It used to be a favorite of mine (still is) so I started singing as I began to gather ingredients to make him an omelet.
"How do you know that song?" he asked.
"I don't remember. I've just always liked it."
"Come sit down and listen to it."
So I did.
It was peaceful sitting there with the snow falling about the fields. I went on a bit about the beauty in winter; the peace I find in the stillness and how absolutely breathtaking it was outside.
Of course Brian has heard me go on and on about winter many times before. This time he laughed, telling me, "You're a Snowy Day person!"
I agreed.
The way the snow was coming down reminded me of the times of long ago when skating with my cousin down at the creek that ran behind our homes. We spent hours at that creek. We'd never get cold. That's probably because we just kept on skating. And sometimes those snowy hours spent on the creek led to a bowl of piping hot cereal at our grandmother's house.
My grandmother-my aunt-my mother all cooked hot cereal. They each had their variations. Some used brown sugar. Some sprinkled cinnamon in the bubbling mix while some served it with cream instead of milk. My grandmother would add a dab of butter as she dished her cereal into a bowl. When making the hot cereal, she'd always use a simple sauce pan with a top that had a dent in it. She used the pan for years. My aunt used it too.
On Sunday mornings in the wintertime, that pan made serving after serving of hot cereal, depending on how many of us were gathered around the table. Besides Oatmeal, favorites included Cream of Wheat and Corn Meal. We weren't picky as long as it was hot and served with buttered toast for dunking. Of course there were no microwave variations-just spoonful after spoonful of creamy, delicious hot cereal cooked in a certain saucepan and served around the table as the snow fell and the wind blew.
So that afternoon as Gordon Lightfoot kept on singing and with hot cereal on my mind, I asked Brian if he'd like a bowl of hot cereal.
"What about my omelet?"
"You could have both if you'd like."
After thinking for a minute with Rainy Day People playing again he replied, "Hot cereal!"
"Wonderful. I'll have a bowl too."
And so as those snowflakes kept swirling outside, inside we sat and enjoyed some piping hot Oatmeal because that's just what Snowy Day people do on a snowy January day.

Posted by Barbara Briggs Ward at 8:42 AM