Ballerina with Wings on Ice 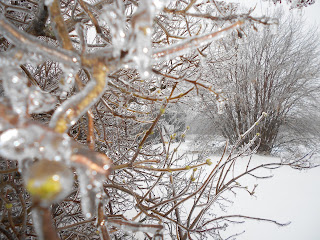 Before last week’s mini ice storm I’d put some suet out for the birds in a clustered bunch of bird feeders. A few of the feeders are made of wood that’s now worn with plastic dividers chipped in the corners. One feeder is made of small, colorful pieces resembling stain glass that glitters when the sun is shining. Once the ice storm hit with howling winds and snow falling and ice forming, many of the remaining seeds in the feeders went flying. Many ended up on top of the ice covering the ground while even more of them ended up under the feeders. Seeds just sitting there on the ice and under the feeders attracted a variety of birds but more often than not, only the big birds were able to conquer the slippery ice; then grab some seeds and take off to a nearby tree to enjoy their winter feast.


Of all the birds that were out there, it was one little bird that caught my eye. She was very small but determined. As my son Brian and I watched her fight for a seed, we found ourselves cheering her on. There is a very slight incline in the yard leading to the bird feeders. You probably wouldn’t notice it but if you are a tiny bird with thin little legs and the wind is pushing you and the snowflakes are knocking you and ice wants to trip you up as you try to put one thin little leg in front of the other in order to get under the bird feeders where some prime seeds are resting, you’d notice that giant incline.


I’m sure that’s how the little bird felt as she tried and tried to get under those feeders. Sometimes she’d get part of the way. Then the wind would take her swirling around and around the ice like a beautiful ballerina with wings giving the performance of a life time. On a few occasions, one of her legs ended up in the air as if she was doing an Olympic-style program in the backyard. Once we saw her pushed by the wind so far away that we thought we’d seen the last of her as she crashed into some leaves frozen in the ice. But that never happened. That only spurred her on to victory under the bird feeders. Back she came, stronger than ever and away she flew with a mouth full of prime, delicious seeds.


You see— this little bird was a fighter, conquering blue jays and cardinals and sparrows and robins and mourning doves as well as the ice and snow and wind . She was determined. She was Forrest Gump and the Little Engine Who Could and Dumbo and Cinderella and Susan Boyle and a certain hockey team who beat those Russians and Rosa Parks and Rocky and Rudolph and Stephen Hawking and Andrea Bocelli and so many more. She was anyone who is physically or mentally handicapped who gets up every day and puts one foot in front of the other. She was the underdog who keeps trying; keeps fighting; keeps going. She was akin to those who are bullied by cowards yet  stand their ground and give it right back to the spineless.


There certainly is a lot going on out at the bird feeders. More than I ever realized. And when it rains or snows or the wind blows or the ice falls, some of those birds stand up and fight for what they believe in.