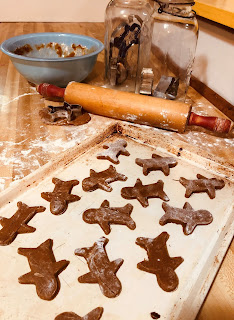 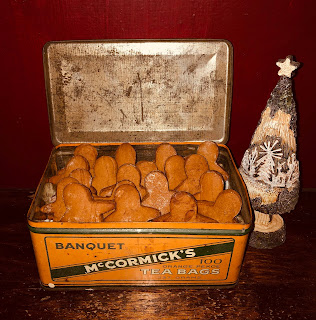 Two little ones came to stay for a while this afternoon. The first thing they asked was if they could make cookies. I'd anticipated the question. I had the dough chilling in the refrigerator. It wasn't long before the cookie cutters were on the counter and the fun began. It was obvious from the start that thing called Wonder had returned. The Season of Christmas was in their eyes, their smiles, their laughter.
It was contagious. After they'd packed up their cookies and headed home, I discovered some of that Wonder was still about the kitchen; inspiring me to make my little, faceless gingerbread men and put them in the old tin sitting on the table by the front door. As I mixed the dough and smelled the molasses and cut the little guys out, baked them, cooled them down and filled that tin, my mind wandered back to that precious time of Wondering. We remember the red suit, the beard, the ho-ho-ho. We remember leaving cookies and milk on Christmas Eve. But when you're a child, there's so much more when you Believe-when that Wonder stirs.
You're certain you hear the sleigh land and the hoofs pawing and Santa sliding down the chimney. Peeking from under your blankets, you're sure he's filling the stockings and placing presents under the tree and eating the cookies you made. You smile as you hear him going back up the chimney.
In an instant you hear the jingling of bells. The pawing of hoofs intensify as those magnificent reindeer pick up speed right above you. The ho-ho-ho echoes over the land as Santa leads that sleigh to yet another rooftop of another family with children nestled under blankets while snow softly falls.
Anything is possible-when Wonder stirs-even the baking of precious little gingerbread men; then placing them in an old tin can and sitting the can back on a table by the front door, thus carrying on a Christmas tradition of long ago.